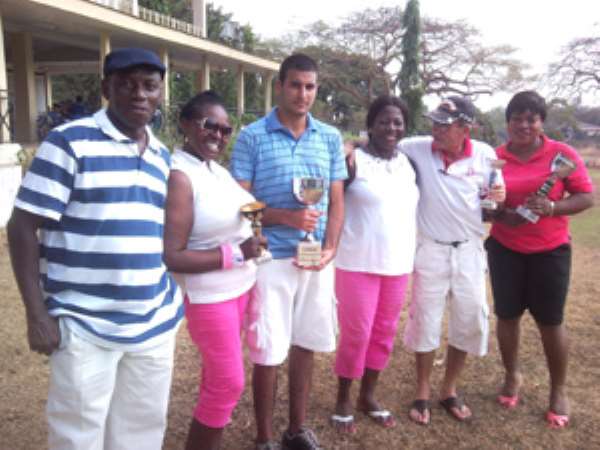 Martin Poku, captain of the Royal Golf Club, in a group photograph with the winners.

THE MARCH edition of the Ashfoam Monthly Golf Medal at the Royal Golf Club in Kumasi lived up to its high billing on Saturday as golfers on parade exhibited exceptional golfing skills to thrill the large crowd at the event.

Sponsored by Ashfoam, the tournament, which is played every month, is geared towards boosting the sport and promoting unity among golfers at the club.

In the men's Group A, Maxwell Owusu Bonsu took the first position with 71 net, followed by Kwabena Poku, 72 net and Wajih Sabaali, 76 net.

Kari Taldu was the winner in the men's Group B with 72 net, with Andrew Grant settling for second position with 75 net, followed by Nana Agyei-Duku, 76 net.

In the ladies Group A version, Ragheda Khalil was the winner with a score of 74 net as Margret Ivy Oppong took the second position with 76 net.

The ladies Group B was won by Vivian Dick who managed 76 net with Gizela Palmer settling for the second position with 78 net.

Peter Korsah was the winner in the professional's category with 75 gross as James Larry finished second with 76 gross followed by Kwame Korsah, 78 gross.

JEK Oppong won the seniors category of the tournament with 42 net as Romeo Sasu was the winner in the Boys Group A.

Andrew Dieter was the winner in the Boys Group B with Ashley Kusi winning the Girls group of the tournament.

Winners of the various categories were presented with trophies and souvenirs from Ashfoam.

Martin Poku, captain of the Royal Golf Club, said he was touched by the high patronage the March edition of the tournament enjoyed.

He said he was equally satisfied about the high level of competition that was witnessed on the day.

Mr. Poku commended Ashfoam for presenting pillows to all golfers that took part in the March edition of the competition.