Manny Pacquiao to run for Philippine president in 2022 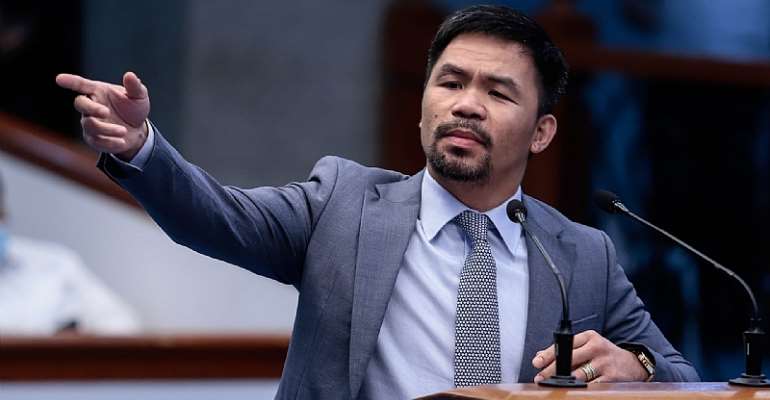 Boxing star Manny Pacquiao says he will run for president of the Philippines next year after railing against corruption in government and what he calls President Rodrigo Duterte’s cosy relationship with China.

Pacquiao, currently a senator, was nominated on Sunday by his PDP-Laban party allies during the group’s national assembly, days after a rival faction nominated Duterte as its choice for vice president and his longtime aide, Senator Christopher “Bong” Go, as the party’s presidential candidate.

Pacquiao, 42, presents a potential obstacle to Duterte’s succession plans as the race for the top post takes shape.

“I’m a fighter and will always be a fighter, inside and outside of the ring,” Pacquiao said at the event. “All my life, I haven’t backed down from any fight. Nothing is impossible if it’s ordained by God.”

Pacquiao’s presidential bid is seen by analysts as a threat to Duterte’s candidate in 2022, as the boxer could split the vote in the southern island that both come from, opening the door for opposition figures.

Go declined the nomination, but the rift between the Pacquiao and Duterte factions has escalated. The senator ranked fifth among 15 possible presidential candidates in a June survey by PulseAsia.

Pacquiao’s faction has not expressed support for Duterte’s vice presidential bid. Duterte is prohibited by the constitution from running for a second six-year term as president.

The eight-division world boxing champion and beloved national hero made the announcement weeks after losing what could be his last professional fight against Cuban Yordenis Ugas in Las Vegas.

Pacquiao was among the world’s highest-paid athletes in 2019, according to Forbes.

The Filipino boxer has been a senator since 2016 and also served as a congressman. He was once a loyal ally to Duterte, defending the president’s deadly drug war and death penalty push.

Recently, however, Pacquiao has criticised the administration for alleged corruption and its South China Sea stance amid a split in the governing party.

“We need progress, we need to win against poverty, we need government to serve our people with integrity, compassion and transparency,” Pacquiao said. “We are fed up with the promises of change.”

The 42-year-old is deeply admired in the archipelago nation for his generosity and hauling himself out of poverty to become one of the world’s greatest and wealthiest boxers.

His boxing credentials along with fighting poverty and corruption are likely to be the key themes of his campaign.

“For those asking what are my qualifications, have you ever experienced hunger?” Pacquiao asked the national assembly held by the anti-Duterte faction of PDP-Laban.

“Have you ever experienced having nothing to eat, to borrow money from your neighbours or to wait for leftovers at a food stall? The Manny Pacquiao that is in front of you was moulded by poverty.”