US Based Actress And Ex Beauty Dr. Krystal Okeke Joins Nollywood,Stars In Daughters Of The Throne 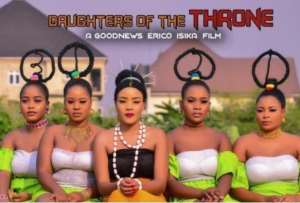 Famous Nigeria US based Ex Beauty Queen, Philanthropist and Actress, Dr. Krystal Okeke is currently on set with renowned Nollywood Stars for the movie titled "Daughters of the Throne". Described as one of the most anticipated Nollywood movie to debut in December 2020, Dr. Kyrstal Okeke is however working with reputable Directors, creative producers and artistic technicians to ensure fruition in her first Nollywood Movie.

In this intriguing movie, Dr. Kyrstal Okeke's Character was one that relatively required vibrance, charismatic dominance, experience and vigour, however, her performance significantly demonstrated the true nature of the character she represented. The movie, "Daughters of the Throne", is been produced and directed by Goodnews Erico Isica, alongside King Toshiba, an Associate Producer.

Some Nollywood celebrities who also featured in Daughters of the Throne are Eve Esin, Queeneth Hilbert, Harry B, Maleek Milton, Ugo Doris, amongst others. According to reactions on social media, Dr. Kyrstal Okeke's Character was not only impressive, but creatively amazing.

Lots of Nigerians, especially key players in the movie industry are yet anticipating "Daughters of the Throne", as it narrates the politics, loyalty, betrayal and politics in feminist Royalty. Krystal Okeke played a key role in this fascinating movie on power, influence and affluence.

Freedom Caesar should bring more tigers — A Plus
21 hours ago