Notre-Dame restoration timeline 'will be met' despite Covid-19 delay 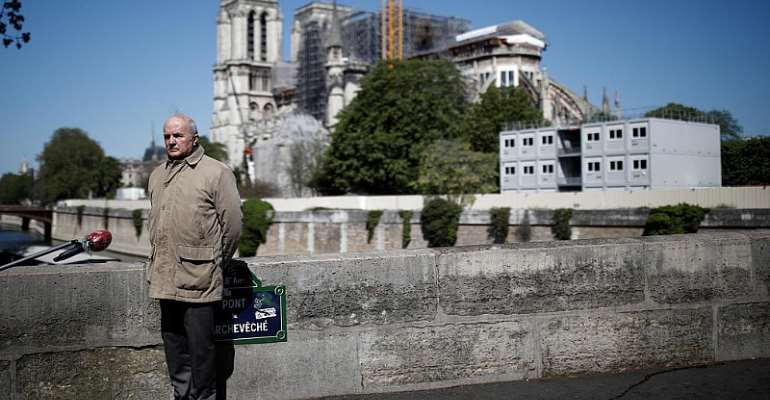 On the evening of 15 April 2019, a devastating blaze broke out at Paris' Notre-Dame Cathedral, destroying large parts, including the spire and most of the roof. A year on, with the world reeling under the coronavirus pandemic, the French president says everything is being be done to ensure the restoration is completed on time.

In a video published Wednesday on Twitter, French President Emmanuel Macron reassured the public that all efforts would be made to adhere to the five-year time line set up to restore Notre-Dame de Paris after the inferno 15 April 2019.

"I believe we need to fix clear objectives and work together to reach them."

Work on the site has been on hold since confinement to curb coronavirus began on 17 March.

The president has promised the clean up and restoration will recommence "as soon as possible."

Before the next phase can begin, the clean-up must be finished. This includes removing a tangle of metal scaffolding, originally holding up the spire, which had been burned in the fire.

Authorities have said that all construction work has had to stop because of the difficulty of maintaining security and safety standards for staff members working on the site.

General Jean-Louis Georgelin, who was put in charge of organising the restoration by Macron, told French media radio he was cautiously optimistic in the future preservation of Notre-Dame.

"Many people have said that in five years, we'll only make a mess of it. Those comments are unfair. What we need to do is uphold the highest working standards without procrastination."

Georgelin said he is confident the ceremony of Te Deum will be held at the cathedral on 16 April 2024, referring to the end of the five-year restoration period. He believes restoration work will begin in earnest in 2021.

"If we suppose that the stop-work period continues for another two months, out of 68 months, we should be able to absorb the delay."

The clean-up for lead contamination was completed before the lockdown, and according to Chief Vicar of the archdiocese Benoist de Sinety, "the doubts surrounding lead have been 95 percent lifted".

However, some particles remain in the courtyard in front of the cathedral, despite a high pressure cleaning which was carried out last year. The application of a layer of protective resin has been delayed due to the confinement measures.

There has been no progress made on defining the causes of the disaster, according to authorities.

In February, the Paris prosecutor Remy Heitz said there were no new elements leading to a criminal investigation.

The theory of an accidental fire being caused by a cigarette butt is being explored by the judges in charge of the inquiry.

According to the historical foundation in charge of collecting donations towards the restoration, the 90 percent of pledges have been honoured, out of some 902 million pledged worldwide.

The organisation published the figures of its fundraising drive held on 15 and 16 April 2019 in a document published on 10 April. It showed nearly 228 million euros had been raised from 236,146 donors in 140 different countries. Forty percent (87 million euros) has already been used.

At 8pm local time (1800GMT) Wednesday evening, one of the bells in Notre-Dame's southern tower will ring in commemoration of the fire.

The time was chosen "to coincide with the applause French people make to thank the hospital staff on the frontline of the coronavirus crisis," said the authorities.

It will be the only ceremony organised at the site of Notre-Dame on Wednesday.

On Good Friday, however, a select ceremony was carried out to celebrate Easter, presided over by the archbishop of Paris Michel Aupetit who dedicated his prayers to victims of covid-19.

He was accompanied by the classical violinist Renaud Capucon and two actors who read religious texts, each wearing protective suits against lead contamination.