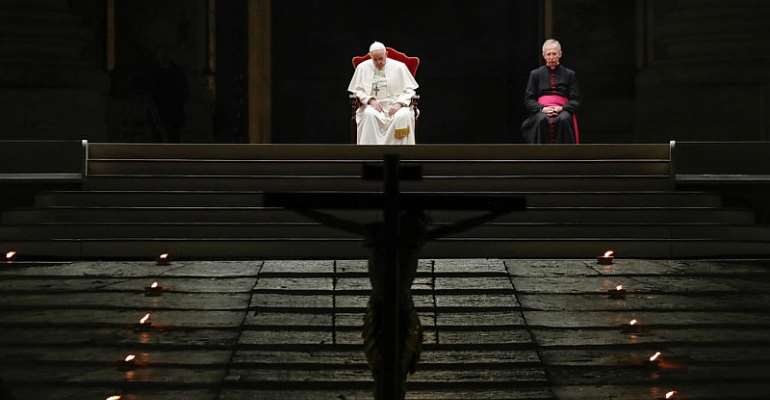 Pope Francis will live stream Easter mass this Sunday for the world's 1.3 billion Catholics, many of whom are in various forms of confinement to stop the spread of the Covid-19 virus.

Rome and the rest of Italy, the European country hit hardest by the virus, have been living under confinement since early March. Italy has recorded more than 19,000 confirmed virus deaths, with the official death toll in the world passed 100,000, though the real toll is feared higher.

Pope Francis live-streamed his Easter Vigil on Saturday from an almost empty St Peter's Basilica, and his only audience for Sunday's Easter mass and "Urbi et Orbi" will be a camera in his private library. Last year the blessing drew 70,000 people to Saint Peter's Square

On Friday he lead  a Good Friday procession in the dark and empty Vatican square. For over 50 years the procession has taken place in the Roman Colosseum in the presence of at least 20,000 faithful.

'Creative' celebrations
Pope Francis has admitted that the entire experience makes him feel "caged". He has reportedly been tested twice for Covid-19 since coming down with a cold at the end of February.

"We have to respond to our confinement with all our creativity," he said in an interview published by several Catholic newspapers this week. "We can either get depressed and alienated... or we can get creative."

Around the world, Catholics have found ways to celebrate their most holy time of year online, through live streams and recorded videos and podcasts. Some have experimented with drive-through blessings.

In France, Paris' Archbishop held a small ceremony to mark Good Friday in the apse behind the Notre Dame cathedral, which burned a year ago. The small service was streamed on television.

The Catholic shrine in the southwestern town of Lourdes began relaying nine consecutive days of prayers on Sunday by Facebook Live and YouTube.