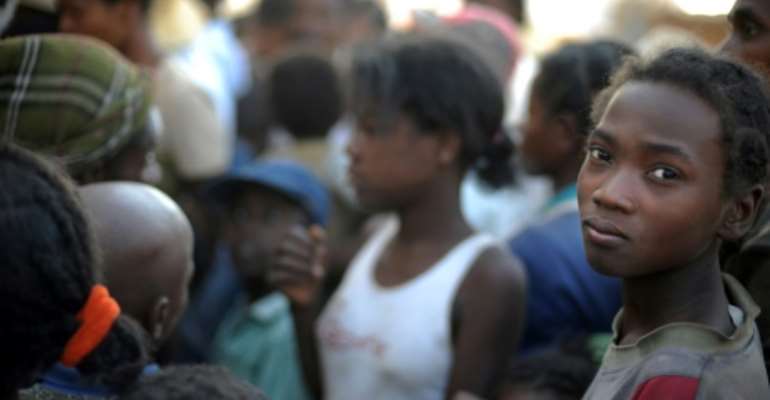 "When my husband is under too much stress, he takes it out on me," said Maharo Soarolahy, a 34-year-old Madagascan villager.

Domestic violence is an evil that exists in every society.

But in patriarchal Madagascar, the problem is entrenched and seems bound to worsen in the coronavirus lockdown.

A third of women here say they have suffered gender-based violence at least once in their lives, according to a 2012 study monitoring UN development goals.

Half of such attacks have occurred at home.

The high statistics are rooted in Madagascar's traditions, in which the paramount social role is allotted to men and gender-based violence is considered a norm.

Nearly one in two people find it acceptable for a spouse to beat their intimate partner, according to the UN Population Fund.

"I often manage to satisfy him sexually. But there are times when I'm too tired and that is when blows just come flying," said Soarolahy, after she had cooked dinner and fetched water for her six children.

In Madagascar, one of the poorest countries in the world, the cast-iron role of tradition is having a disastrous impact on women, said Simon Ravelojaona, coordinator of CECJ, a charity supporting victims of violence in the southern region of Ambovombe.

"Some women feel neglected if they are not beaten by their husbands," he said.

In Madagascar "a woman has no right to express herself. In case of a divorce she gets nothing from her husband. She inherits nothing. That's what women's life is," he said.

Unsurprisingly, just five percent of assault cases end up in court, according to Ravelojaona.

Resigned to their fate, feeling shameful and caving in to social pressure or ignorant of their rights, most abused women simply do not lay charges.

"At the gendarmerie, you have to bribe to sue someone," explained Sourayah Banou Vololomihaingo, who heads the CECJ.

After much heated public debate, Madagascar last year adopted a law punishing gender-based violence such as "physical, sexual, psychological and economic violence within the family... including traditional practices harmful to both sexes".

Flouting the law attracts sentences of between six months and five years in prison and fines of up to $270 (250 euros) -- a punishment that has been welcomed by campaigners.

Overwhelming male domination has a cascade of consequences on Madagascan society.

In the Ambovombe region, contraceptives are accessible to all, thanks to the UN and Japanese aid. "But resistance from men blocks everything," said Robena Mampionindray Razafindratovonimanana, a local physician.

Families of up to 15 children in this region are not an exception.

"My husband beat me when I asked him if I could use family planning," said Juliette Vahinala, 45, a mother of eight.

"He thought I wanted to cheat on him, and not risk getting pregnant by another man."

Apart from beatings, there are many rape cases, said Clovis Rakotoninaina, the gendarmerie boss in Tsihombe village, 30 kilometres (18 miles) from Ambovombe.

In most cases, either it is impossible to identify the rapist or the family settles the matter "amicably" with the perpetrator, he said.

Some victims' families have reprimanded the police chief for handing over cases for prosecution without their consent.

"According to them, I would have just destroyed their social ties," said Rakotoninaina.

The only solution, according to Rakotoninaina, is "social dialogue" to erode harmful traditions and point out the availability of the law.

If there is time when vigilance and awareness is most needed, it is now.

President Andry Rajoelina has imposed a lockdown on the country's largest cities, including the capital Antananarivo, and couples are forced to spend more time together in confined spaces.

"Violence is going to increase very fast," warned Nathalie Razafindehibe, head of the National Commission to Combat Violence against Women.

"People of both sexes are going to find themselves at home without money, as there are no jobs."