Death In The Frying Pan: The Case Of Joyce Bawa In Salaga 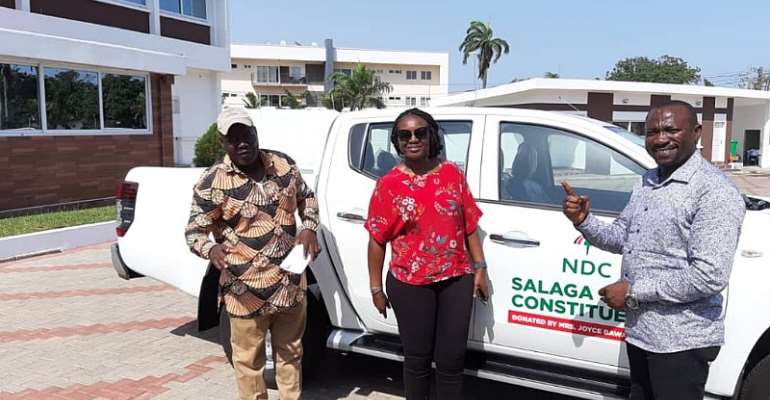 The symbol of unity is habitually upheld and characterised by political parties and incontestably the driving force to every victory.

Over the years, the National Democratic Congress (NDC) under the leadership of Former President, John Dramani Mahama has portrayed such unity in their struggle to the 2012 election, thus won the elections.

Fast forward in 2016, the NDC lost abysmally to the NPP.

In 2018, John Mahama was elected the party’s flag bearer to contest the 2020 general elections.

In his bid to winning the 2020 elections, the former president issued some directives to his appointees and followers.

Notable among them was for the appointees to adopt a constituency.

Owing to this, many including his special aid, Joyce Mogtari Bawa have since set the pace.

She has adopted the Salaga South Constituency which is her home constituency naturally.

Two weeks ago, Hon Joyce donated a brand new Mitsubishi double cabin pick up to aid in the activities of the party.

This single gesture though received commendation is also the most criticized because of how it was presented.

Hajia Zuweira Ibrahima contested for the 2020 NDC parliamentary candidate for the Salaga South constituency and won to represent the party in the 2020 general elections.

For records sake, she is the first female to have ventured in that regard and eventually won.

It is imperative to also note that Hajia Zuweira and Hon. Joyce Bawa are from the ‘Sungbun’ royal gate of the Kpembe traditional area.

I don’t want to delve into the trajectory of how they got closer to the Johns but it is public knowledge that the two are close with the John’s.

Hajia Zuweira was conspicuously missing at the handing over of the Mitsubishi double cabin pick up donated by Hon. Joyce.

Pictures of Hon. Joyce flouted various social media handles without a single of the pictures showing the PC in attendance.

Many party faithfuls including my good self are unhappy and have these questions;

What happens if the PC brings her branded cars to the constituency for campaigns? Will she be allowed to brand the one donated by Hon Joyce?

Hon. Joyce being a politician should understand the dynamics of politics especially the key role unity plays in winning elections.

The aid is seen on several occasions sponsoring a certain NDC vigilante group ‘Bamuyarda’ to cause disunity among the party.

Hon Joyce should know she isn’t contesting any elections and so should channel any support she has for the party through the PC.

The party needs the Salaga south seat in Parliament come December 2020 and all including Hon. Joyce should recognize that.

This is the second time Hon Joyce is seen playing the devil's advocate.

In 2016, she diverted items meant to canvass for votes to her aunty, Hajia Hawa Doshie who is the NPP women’s organizer for Salaga south.

Certainly, you cannot be doing the same things and expect different results, the disunity characterised if left unchecked will result to another embarrassing defeat in 2020.

Hon. Joyce must explain to the good people of Salaga South why she handed over the pick up without the PC.

The former President should take interest in calling his immediate officers who are playing divisive tactics to order or the defeat in 2016 will be better than what will come in 2020.

Hajia Zuweira is the PC elect and all must respect and support her to oust the incompetent MP for the area.