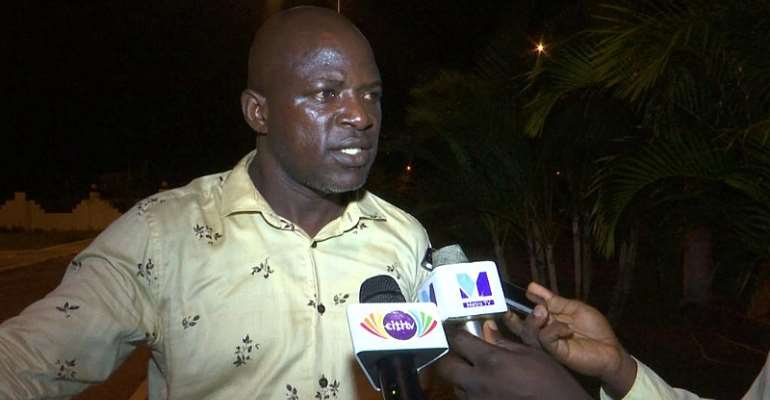 Executives of the ruling New Patriotic Party in the Ellembelle Constituency have denied receiving bribes from illegal small scale miners in the area.

A group of illegal small scale miners who were destroying three water bodies including Ankobra River from their activities in and around Teleku-Bokazo and Anwia in the Ellembelle District alleged that Constituency Executives have been collecting GHS10,000 worth of bribe every two weeks from them under the pretext of protecting them from Operation Vanguard.

They made the allegation after their activities were stopped during a police swoop under the order of the Constituency Chairman, Samuel Atito Akainya.

On Monday 23rd March, a group of galamseyers addressed a press conference at which they leveled series of ungrounded and unsubstantiated allegations against the constituency executives and a drone pilot. They sought among others to mislead that the constituency executives and a drone pilot collect GHC 10K every 2 weeks from them under the pretence of protecting them from operation vanguard and other forms of threats.

We want to state without a shred of equivocation that, the Constituency Executives have never collected any money from any galamseyer for the alleged purpose or ever been involved in any illegal small-scale mining activity (galamsey) in the constituency as sheepishly alleged by the galamseyers and their guardian angel.

The allegations are absurd, shallow and a fabrication meant to deceive and shield their guardian angel (Ellembelle DCE-Kwasi Bonzo) who is neck deep in the galamsey activities in the district with them hence their plan of waging such vicious media war to deter the efforts of the constituency executives and chiefs who have declared a war against galamsey in the district.

The Constituency Executives noticed the presence of these galamseyers in the district last year upon several complains from party faithfuls and chiefs from the affected communities over the extensive destruction of lands and water bodies. The executives then drew the attention of the District Chief Executive (DCE) to expedite action to halt the menace.

Somewhere August last year, 2 of the drone pilots led the police to seize some excavators from these galamseyers upon complaint from the executives. The seized excavators which were packed at the police station miraculously returned to the same galamsey site to continue the illicit galamsey activities under the instruction of the DCE. It was rumoured then that monies were paid to the DCE before releasing the excavators.

The Constituency Executives again noticed this year that, galamsey activities have intensified to an unprecedented level and largely affecting water bodies in the district. The executives then furiously confronted the DCE again about the menace.

On the 3rd of March this year, a joint operation with some constituency executives (2nd Vice Chairman and Youth organizer), the DCE and the police was carried out of which according to the DCE 7 excavators were seized and five persons arrested.

A few days later, the seized excavators which would have served as deterrent to other galamseyers and substantial evidence in case of any court action amazingly found their way back to site again for the same illegal activities. Our checks revealed that the DCE, Kwasi Bonzo unpatriotically took ten thousand Ghana Cedis (GHC 10,000) for each excavator totalling GHC 70,000 and shockingly released the excavators to them.

This action by the DCE without informing the constituency executives who forced him to undertake such operations confirmed the long-held rumours that the DCE owns a galamsey site, excavators and has been receiving weekly remittances from other galamseyers in the district.

The Constituency Executives then realized that the deceptive fight against galamsey by the DCE was a sham and a well-thought-out master plan, designed to deceive the public.

On the 14th of March, the Constituency Executives, the police and some media personnel's unknowing to the DCE, carried out an independent operation at the galamsey sites. To our amazement, all the supposed seized excavators by the DCE were all on site actively doing galamsey with impunity at the full glance of the media, police and the constituency executives.

Most of them run away but 3 persons were arrested by the police and took away some of their fuel as exhibit.

The operation was widely covered by the media and can be verified at Esiama police station, Newday FM and West End Radio, all in Ellembelle and Jomoro District.

This operation temporary halted their activities. The visible crusade and agenda to completely eradicate any galamsey activity in the district by the constituency executives triggered the unfounded allegations in their press conference which was obviously engineered by the DCE.

The Constituency Executives finally want to establish that:

We want to emphasize however that this issue of “Galamsey” is about the health, lands and water bodies of the good people of Ellembelle and that we can assure that no amount of character assassination, vilification and insults will demoralize us to end this fight.

We therefore call on National Security, Inter-Ministerial Committee on illegal Mining, Operation Vanguard and Galamstop to quickly storm Ellembelle district to help save our lands and water bodies.