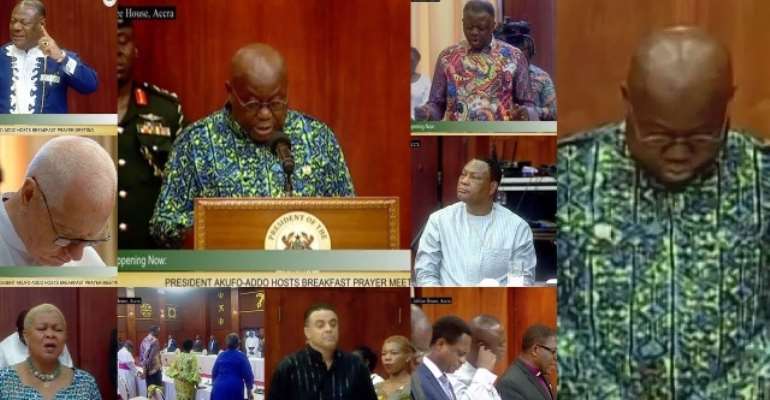 A founding member of the governing New Patriotic Party, Dr Nyaho Nyaho-Tamakloe has said only Pharisees and hypocrites would organise a prayer meeting and beam it on national television in the manner President Akufo-Addo and the clergy did concerning the coronavirus situation in Ghana a few weeks ago.

According to him, what the President and the clergy did is what hypocrites and Pharisees do.

“It’s a clear demonstration of hypocrisy”, the retired army man and medical doctor told Felicity Naana Nelson on Class FM’s Straight Talk programme recently, adding: “Look, I’m a Christian. I’m deeply involved in my church; I’m a Presbyterian. To be more precise, Osu Ebenezer Church. You’ve heard the word Pharisees and Sadducees. What they did is what Christ condemned years ago. It’s a display which probably would have been put up by the Pharisees”.

According to him, “We have problems, serious problems, practical problems. Even if you want these priests to go and pray, they can do it quietly, but projecting it to the public” that way was not the best.

“Have you seen any nation, so far, with people behaving like that? You’ve seen President Trump having the clergy in America around him? Do you see that in Britain; their Prime Minister doing that? Do you see that even in South Africa? But it’s typical Ghanaian attitude which has been endorsed by Akufo-Addo himself.

Asked if he thought it was for political capital, he said: “…You have used the word political capital but this is even going to be a minus for him. I’ve been with Akufo-Addo for years; I don’t know who advises him; what sort of advisors are these? You get certain clergymen with cameras around?”