Trump ditches hopes of quick virus bounce-back for US

By Ben Sheppard and AFP bureaus 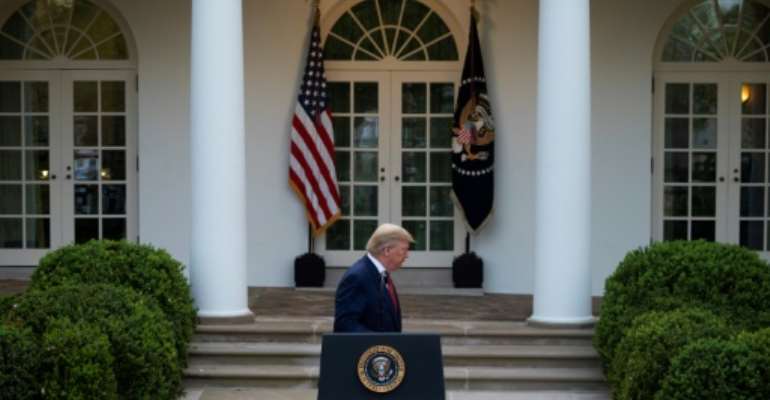 President Donald Trump on Sunday abandoned his timetable for life returning to normal in the United States, extending emergency coronavirus restrictions for another month, while Spain suffered its deadliest day.

Trump, who had hoped to shortly re-open much of the US, said the death rate in the country was likely to increase for two weeks and announced "social distancing" guidelines would be in place until at least the end of April.

More than 40 percent of the world's population has been asked to stay at home to halt the deadly march of a disease that has claimed some 33,880 lives.

Hospitals are rapidly filling with patients in Europe and the United States -- now the focal points of a pandemic that began in Asia but has upended the global economy and upset everyday life in unprecedented ways.

Spain announced 838 deaths in a 24-hour period, the third consecutive day it has seen a rise.

The US has witnessed explosive growth in coronavirus cases, including a doubling in cases in only two days, with New York hardest hit.

Trump said the better that Americans obey the emergency guidelines to stay home "the faster this whole nightmare will end."

A burial in Spain, which along with Italy accounts for more than half of the world's coronavirus deaths. By BALDESCA SAMPER (AFP)

"Nothing would be worse than declaring victory before the victory is won," Trump said, altering his previously upbeat tone.

He said he expected the country to "be well on our way to recovery" by June 1 -- dropping his previous target of mid-April.

Senior US scientist Anthony Fauci issued a tentative prediction that COVID-19 could claim from 100,000 to 200,000 lives -- a figure Trump described as "horrible."

As of Sunday, more than 3.38 billion people were asked or ordered to follow confinement measures, according to an AFP database, as the virus infects every sphere of life, wiping out millions of jobs, postponing elections and pressing pause on the sporting scene.

Worst-hit Italy, with 10,779 deaths, and Spain, with 6,803 dead, together have accounted for more than half of the world's deaths.

Both countries are clinging to the hope, however, that they are closing in on the peak of the crisis.

'We are on the verge'

Several countries warned citizens that lockdowns will be the new normal for an indefinite period.

Spain is toughening already tight restrictions on movement while Italian authorities said they would extend a shutdown past an April 3 deadline.

"My ICU (intensive care unit) is completely full," said Eduardo Fernandez, a nurse at Infanta Sofia hospital in Madrid, where authorities have set up a 5,500-bed field hospital and transformed an ice rink into a morgue.

"If it is not a complete collapse, we are on the verge," he added.

As health facilities in even rich countries buckle under the pressure, aid groups warn the toll could be in the millions in low-income countries. By SAJJAD HUSSAIN (AFP)

The pandemic has spurred a worldwide scramble for medical gear as doctors and nurses struggle to dole out limited stocks of face masks and life-saving ventilators.

Countries and territories with confirmed new coronavirus cases, as of March 29 at 1900 GMT. By (AFP)

The US is now home to the highest number of confirmed COVID-19 infections globally with more than 140,000 cases, according to a Johns Hopkins University tally.

The US death toll reached 2,467 on Sunday, with cities like Detroit and New Orleans joining New York as hotspots.

Across the Atlantic, Britain's death toll passed 1,200 as Prime Minister Boris Johnson -- who tested positive for the virus last week -- warned that dark days lay ahead.

"We know things will get worse before they get better," said Johnson, who reports only mild symptoms.

The country's deputy chief medical officer warned that life would not return to normal for six months or more.

France deployed two specially equipped trains to transport coronavirus patients from overcrowded hospitals in the east to facilities along the western coast.

In hard-hit Iran, President Hassan Rouhani also said the country must prepare to adjust to "the new way of life" for the foreseeable future, after 123 more deaths were recorded.

The mayor of Moscow ordered self-isolation for all residents as Russia prepares to close its borders on Monday and take a week off work.

Countries and territories with confirmed new coronavirus cases as of March 29 at 1000 GMT. By (AFP)

More than 720,000 cases of the novel coronavirus have been officially declared around the world since the outbreak began late last year, according to the Johns Hopkins tally.

As health facilities in rich countries buckle under the pressure, aid groups warn of the toll for the millions in poor states and war zones such as Syria and Yemen.

Three billion people around the world lack access to running water and soap, the most basic weapons of protection against the virus, according to UN experts.

But in Benin, President Patrice Talon said his country could not enforce public confinement because it lacks the "means of rich countries."

In China, however, life is creeping back to normal in the ground-zero city of Wuhan.

"Initially we were more scared and maybe thought it was safer overseas," said Han Li, who is helping floods of locals returning to Wuhan.

"But now it doesn't seem this way. It seems it might be safer within China."

Tell your family and friends choking the payroll to forfeit ...
2 minutes ago