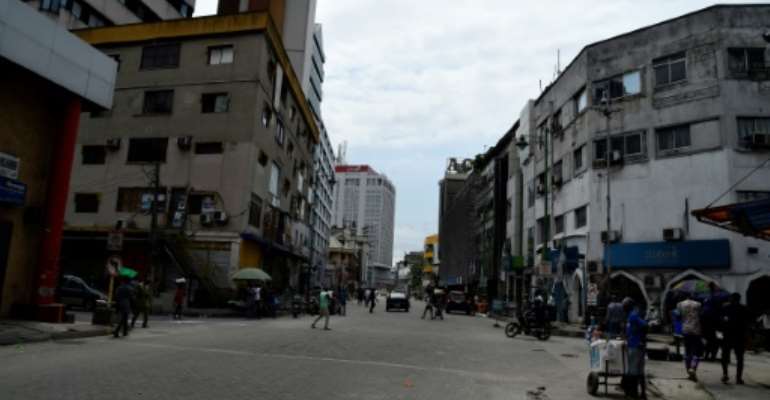 Broad Street, the home of some of Nigeria's biggest corporations, has become almost deserted. By PIUS UTOMI EKPEI (AFP)

The normally bustling markets have thinned out and the notoriously clogged roads are eerily free: Lagos is lurching towards shutdown as Nigeria tries to prevent the spread of coronavirus.

Enforcing strict social distancing rules is proving tough all across the globe -- but in a chaotic megacity in Africa's most populous nation, it represents a mammoth challenge.

Local authorities in the economic hub, where some 20 million souls are packed together tightly together, have stopped short of ordering a total lockdown.

But they have advised people to stay home, restricted gatherings and shut schools, bars, non-food markets and shops to try to empty the streets.

People were still out skirting the pools of foetid water in Jankarra market on Friday but the crowds were well down on normal.

Rotimi Oyedepo stood in front of his shuttered chemical store after local police had ordered him to lock up.

The authorities are setting up a coronavirus isolation and treatment centre at a sports stadium. By PIUS UTOMI EKPEI (AFP)

"It will not be easy for us to survive -- but there is nothing that we can do," the 47-year-old father of four said.

In a country where around half of the 190 million population live in dire poverty, many cannot afford to stop working for too long.

"We can't stay (away from work) more than one week," Oyedepo said.

"By Monday, Tuesday, in one week everyone will come out to do what they need to survive."

Nigeria has so far confirmed just 65 infections but testing has been limited.

Officials admit the country is at a critical moment. It faces a race against time to try to stop an "exponential" rise in cases.

The authorities have closed international airports and sealed the borders in an attempt to stop new infections coming from abroad.

Most domestic airlines have stopped, trains have been halted and several regions have cut all travel in and out.

Lagos Police Commissioner Hakeem Odumosu squeezes his way through a market to monitor compliance with measures to curb the spread of coronavirus. By PIUS UTOMI EKPEI (AFP)

But convincing people to stay home is not always easy.

Dauda Ali, 24, said he had ventured out to try to get money from a friend in another Lagos suburb.

"I sell building materials and since the government said we should not open, I am not finding it easy to feed my family," he told AFP.

"I want government to provide some relief to those who are unable to do anything because of the restrictions."

Lagos state governor Babajide Sanwo-Olu on Friday announced a "stimulus package" to give two weeks' worth of basic food supplies to an initial 200,000 households.

"Please stay home with your loved ones. We want the best for you," he wrote on Twitter.

But there is not much leeway for the authorities.

The global shockwaves from the crisis have seen state revenues collapse in Africa's biggest oil producer and the central government is looking to cut its budget.

At the popular Oke-Odo market, most shops were shut Friday as a government task force enforced the restrictions.

Traders said prices had risen as people rushed to stock up but there were worries limited transport could spell shortages.

"Our suppliers are not coming again and customers are coming daily," said fruit seller Ismail Yahaya.

"I beg God to stop this disease. It is bad for business."

In the country's capital city Abuja politics has ground to a halt. Parliament has been shuttered and bureaucrats have been ordered to stay at home.

One civil servant who asked not to be named said his organisation was now providing only a "very skeletal service".

Getting the message across: City authorities have stepped up appeals for social distancing and hygiene. By PIUS UTOMI EKPEI (AFP)

"It's strange and a serious concern to everyone," he told AFP.

"The situation has instilled some fear of the unknown for many Nigerians at their work places."

Trying to maintain companies or government ministries with employees working from home is not feasible for many.

Nigeria is plagued by frequent power blackouts that can leave people without electricity and internet for days.

"Hard times demand hard decisions, and people will just have to cope with the situation which I believe may not last for too long."