How the people of Sudan pulled off an improbable revolution

By Stephen Zunes - The Conversation 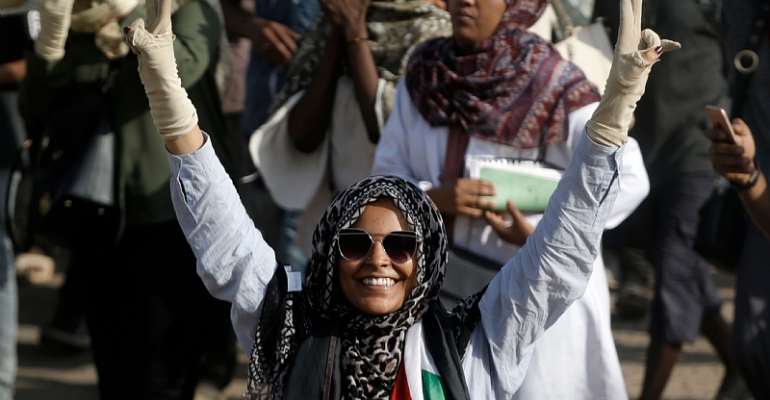 A woman flashes the V for victory sign as Sudanese protesters demonstrate in Khartoum on July 25, 2019. - Source: Ashraf Shazly/AFP via Getty Images

When the turbulent and often tragic history of the past decade in North Africa is written, the 2019 pro-democracy revolution in Sudan will likely be considered one of the few bright spots. One of the world's most brutal dictatorships —- in power for over 30 years —- was overthrown in a massive nonviolent civil insurrection involving millions of Sudanese. In its place is a liberal technocratic civilian administration .

Whether civilian democratic rule will survive the serious challenges still facing the country remains to be seen. But for now a key question is: how did they do it?

Conditions in Sudan were not auspicious for a successful pro-democracy civil resistance movement. The regime was oppressive, entrenched, and had been successful in its divide and rule tactics when it came to the large and ethnically heterogeneous nation .

In addition, three decades of repressive military rule had largely decimated civil society institutions like labour unions and human rights organisations and the reactionary Islamic leadership had put severe restrictions on women . Over five million Sudanese , including many of the country's most educated people, had emigrated.

Lastly, Saudi Arabia and the United Arab Emirates were helping to prop up the military regime. And most of the West had seemingly written off Sudan as a hopeless case.

Yet, starting in December 2018, a movement emerged which eventually brought millions of Sudanese onto the streets. By April 2019, General Omar al-Bashir was overthrown by fellow military officers. Protests continued and, despite hundreds of additional deaths, by August the military stepped down in favour of a civilian-led transitional government.

There are numerous reasons for the success of this uprising. The key ones range from the regime's incompetence and the fact that the economy was in a mess, to the way in which the opposition forces organised themselves into a broad-based movement. Another major factor in their success was that they chose to use nonviolent tactics such as sit-ins and demonstrations.

A number of factors contributed to the success of the uprising. These included the regime's weaknesses, as well as the tactics used by the opposition forces.

As far as the regime was concerned, there were at least four factors working against it. These included:

Divisions: To the opposition's advantage, some of the main elements of the repressive apparatus of the regime — the police, intelligence, military, and special forces — were divided . The opposition did an excellent job of exacerbating those divisions and using them to its own advantage, offering sanctuary for deserting troops, shaming families of the hardline forces, and winning over some junior officers.

Incompetence: The state was in many respects weak and incompetent. The economy was in a shambles. This became particularly marked after the country lost access to oil reserves in the south after South Sudan became independent in 2011. Education, transport, health care, agriculture and other basic infrastructure had deteriorated significantly during its three decades in power.

Sanctions: international sanctions added to chronic corruption and mismanagement in weakening the economy.

Disaffected youth: Young Sudanese had had enough. They felt they had no future and they had nothing more to lose. Interviews with young people during my visit in January revealed a sense of sheer desperation, a sense that “enough is enough”.

When it came to the movement itself, a number of factors contributed to strengthening its efforts, and making them more effective. Among them were:

Scope and scale: While some civil insurrections have largely taken place in the capital with mostly middle class support, the Sudanese revolution took place all over country, in all regions, with diverse class and ethnic participation. Another key component was the fact that popular resistance committees were active in even the poorest neighbourhoods.

This was in conjunction with the role played by the Sudanese Professionals Association, an alliance of professional trade unions, which played a key leadership role.

Building such a broad coalition of forces was vitally important, given the size and complexity of the country.

National unity: For decades, the regime had tried to divide Sudanese by North and South, Arab and non-Arab, Muslim and non-Muslim. The pro-democracy protesters recognised that national unity was critical and consciously resisted efforts at divide-and-rule.

The role of women: strong leadership from women helped increase the numbers of protesters by encouraging women to join the protests. It also lent credibility to the protests and better popular perception of the movement and its goals by challenging notions that they were violent and dangerous.

The Sudanese opposition had, on previous occasions, engaged in violent struggles. For example, in 1993 an armed guerrilla movement operating out of bases in Eritrea was launched. But it failed to provoke a more widespread popular uprising and was formally disbanded in 2006 . Similarly, protesters turned violent during the civil insurrection of 2013 . The uprising was crushed within days after scores of civilian deaths.

The choice of peaceful protests, sit-ins and strikes made it difficult for the regime to depict the movement in a negative light. And nonviolence meant that the movement attracted sympathy it would have lost through violent tactics. This swelled the number of people coming out onto the streets.

What still needs to be done

There is still much to do to consolidate democracy and civilian rule in Sudan. Though civilians dominate the transitional government, the military and other elements of the old guard are still part of the system.

But the accomplishment of toppling Omar al-Bashir can be a lesson to those struggling for greater political freedom and social justice through the greater Middle East – and beyond.

A version of this article first appeared in Inside Arabia .

The author wishes to thank the International Center on Nonviolent Conflict for supporting his research.

By Stephen Zunes, Professor of Politics and International Studies, University of San Francisco