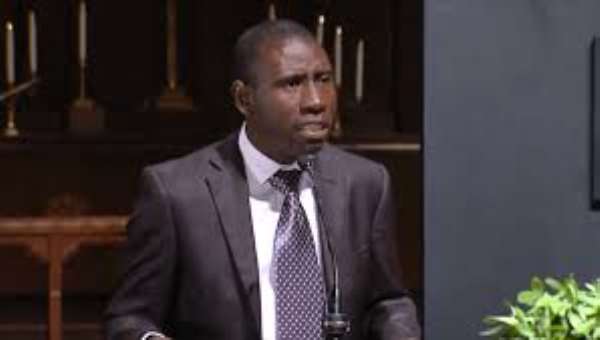 James Kofi Annan, a self-styled entrepreneur and President [of Challenging Heights, a Wiinneba-based NGO, was on Friday March 20, 2020, cited for fraud by the Winneba District Police Command./B]

He was charged with two counts of dishonestly appropriating GHC100,000 contrary to section 147 of the Criminal and Other Offences Act, 1960, Act 29 and Stealing, which is also contrary to section 124 of Act 29 and Money Laundering when he appeared before the Winneba District Court, presided over by His Worship, Isaac Oheneba Kuffour .

He was charged alongside two other accused persons, Anthony Enyan, (whose real name is Desmond Nyan, but gave his name as Anthony to hide his identity,) and John Banafo on the same charges, but the court was told that, the third accused is currently at large.

FACTS OF THE CASE:
Presenting the facts of the case to the Court, the Prosecutor, Sergeant Doreena Azumah told the Court that, the first accused received an amount of GHC100,000 in his account from a different account, a deposit he knew was mistakenly paid into the said account.

She added that, notwithstanding his knowledge of the money not being his, the President of Challenging Heights, a local NGO, went ahead to utilize the said amount.

The court was told that, attempts by the complainant to retrieve the amount have proven futile, as Annan has become recalcitrant and engaged in hide and a seek with the depositor, in an attempt to evade the refund of the said amount, leading to the victim lodging a complaint with the Police.

She told the court that, several calls, invitations and attempts to reach out to James Kofi Annan by the police proved futile, leading to his arrest and subsequent arraignment before the Court.

ADMISSION BY ACCUSED:
The Prosecutor further told the Court that, the first accused (Kofi Annan) admitted to having received the amount in his account.

This paper has learnt that, at a press conference organised and addressed by the 1st accused (Dr. Annan), he admitted having received GHC100,000 in his two separate accounts in two equal instalments, and same was appropriated by him.

PLEAS:
The first and second accused however pleaded not guilty to the two counts against them.

Counsel for first and second accused, Godwin Edugyi Tamakloe Esq applied for bail for the two, which application was granted by the court.

The Lawyer applied for a self-recognisance bail for the accused persons, but the Court granted same to the first accused, Kofi Annan and GHC10,000.00 bail bond for the second accused with a surety to be justified.

The case has been adjourned to April 21st, 2020.
BACKGROUND:
Kofi Annan had earlier held a press conference in an attempt to twist the issues and to divert attention by accusing the Winneba District Police Command of an attempt to scandalize him.

But the Winneba District Police Command, speaking to the media on the matter, disclosed that, Kofi Annan had been evasive, as he turned down numerous invitations by the police and decided to again engage in a hide and seek with the Police Command until a warrant of arrest was secured from the court to effect his arrest.

Information available to this paper indicates that, well-placed members of the opposition National Democratic Congress (NDC) of which he claims to be a leading member in the Effutu constituency, are shocked at the rude manner in which Kofi Annan treated the police.

A well-placed member of the party told this paper, “this brings to question the fact that, Kofi Annan's claims that, he was financing the NPP was a hoax.”

NDC DISSOCIATES THEMSELVES:
Meanwhile, the National Democratic Congress in the Effutu constituency, has since upon the matter being investigated by the police, distanced itself from Kofi Annan.

A statement to that effect was signed and released to the media last week by Alexander Dadzie, the Constituency Communications Officer.