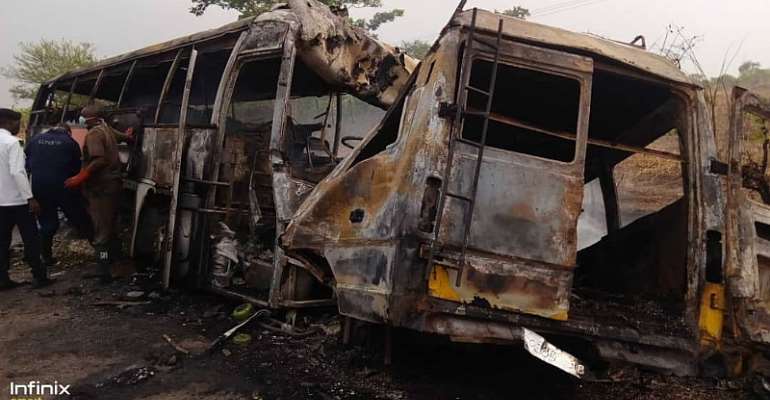 There was carnage once more on the Kintampo to Tamale road yesterday, one of many in the past few years. We are compelled to ask whether there would be an end to this bloody trend on our highways.

It was the usual head-on-collision-triggered vehicular accident with multiple fatalities. No wonder Ghana is ranked among countries with bad road safety records in the world.

Needless and avoidable deaths occasioned by inappropriate road attitudes have thrown families into states of despondency and confusion. We wish there was an end in sight for road carnage.

The fire which ensued and consumed the bodies of the scores of the dead was the outcome of the friction from the collision.

The country's continuing road carnage suggests that the anomaly is not responding to the treatment being meted out by the relevant authorities. The managers of these agencies must be at their wits' end as to what to do to reverse the trend.

We must, of course, change our response to the bedlam which has become the feature of our roads if we want different and positive results.

Unless we change the current module, the bloody outcome won't change regardless of the so much talk we indulge in when bloody accidents occur.

Preliminary reports from the Kintampo Motor Transport and Traffic Department (MTTD) of the Ghana Police Service suggest inconsiderate driving on the part of one of the drivers.

Occurring at about 4am yesterday, not much different from previous killer accidents, is an indication also that drivers suffer a certain level of fatigue or even sleepiness and, therefore, lose concentration, especially at night.

We are yet to officially manage the number of hours drivers of commercial vehicles must drive before taking a few hours mandatory rest.

In this particular case, the driver of the vehicle which veered off its lane into the opposite one was obviously the one who triggered the accident.

This pattern is the order of many accidents on our highways in the past years. Until we dualise our major highways and regulate night driving on long distances, our roads would remain the deathtraps that they are, snuffing lives out of breadwinners.

It is simply unacceptable that so many are losing their lives on our highways that the trend is on the verge of being no longer newsworthy.

What is it about the Kintampo to Tamale road and the Western and Central regions roads that they continue to stand as nightmares for the travelling public?

We would repeat our call on the authorities to consider restricting the licensing of commercial drivers to a certain age bracket and minimum education. This would help although a section of the public could oppose it.