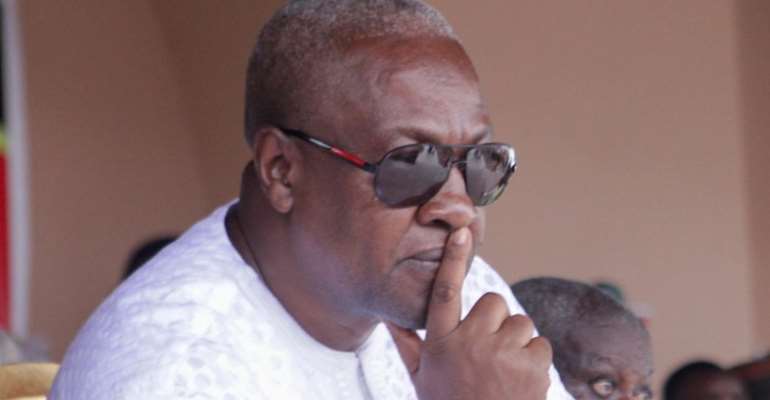 The recently found attitude of boycotting by former president John Dramani Mahama should be brought to book, condemned and used against him in 2020 by well-meaning Ghanaians.

His attitude, posture, speeches and exhibitions seriously take his name out of the books of statesmanship and the character a titled statesman should portray.

If nothing at all, to have boycotted and still boycotting very sensitive national events such as the recent State Of Nation Address (SONA) and the 63rd Independence Anniversary Celebration are and could only be described as improvident, nitwitted and irresponsible.

This hatred traces its roots back to the speech delivered by the Asantehene at the UN General Assembly which relates to the Otumfuor's mediation role which compelled he, John Mahama to concede defeat in the 2016 general election.

Former President John Dramani Mahama is by all indications surrounded by an advisory team led by an Ahithophel and in this case he, John Mahama has become a patchy, misinformed and misled about by very ridiculous, Ahithophelically possessed counselors.

The NDC at this point should be worried about their state of affairs and how bad John Mahama's leadership as flagbearer is pulling down the little fortunes left of the party.

2020 is definitely a lose-lose game for the NDC owing to the unrepentant misbehavior of their flag bearer and his Ahithophelic counsel of elders. John Mahama should be counseled against his skin pain boycotts of national events knowing he is an ex-president and for that matter a statesman.

A statesman must definitely be a responsible person acting as such and he, John Mahama lacks this merit. This giddy-brained attitude, certainly, is not statesmanship.