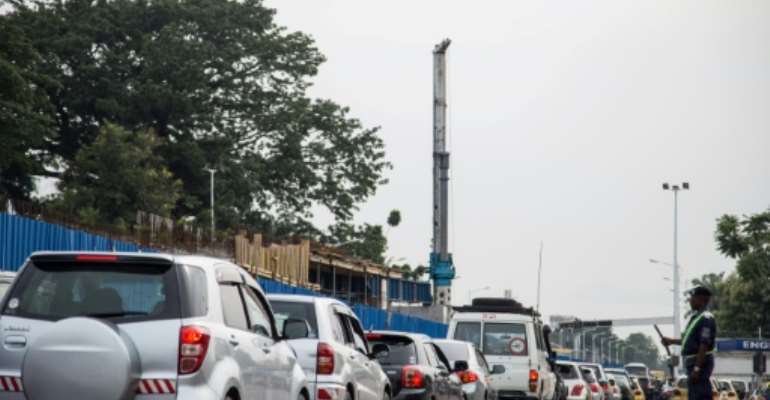 The slow pace of reform in DR Congo has sparked traffic jams on arterial roads. By Junior KANNAH (AFP/File)

A programme to repair DR Congo's shambolic infrastructure launched with much fanfare exactly a year ago has barely taken off, with allegations of corruption sparking an investigation.

But a year on, nothing has been inaugurated in the country's sprawling and chaotic capital Kinshasa.

Work meanwhile on flyovers, which the government had said would be ready by the end of May, has added to the woes of weary commuters who already battle with bottlenecks and traffic jams.

The road to the international airport in Ndjili is jammed with almost zero progress on three such flyovers.

"Journeys that took 30 minutes now take an hour or even an hour-and-a-half," complained Junior Shaba, a minibus driver stuck in a massive traffic jam on an arterial avenue.

"They have stolen the money!" added his colleague Bob Yundula.

After carrying on first-hand inspections at the sites, President Tshisekedi ordered a judicial probe.

Justice Minister Celestin Tunda Ya Kasende said this investigation would mark a turning point in this corruption-ridden country.

Tshisekedi has made fighting graft a priority under pressure from the Democratic Republic of Congo's lenders like the United States and the International Monetary Fund.

The flyovers are due to be ready by the end of May. By Junior KANNAH (AFP/File)

But the president last Friday declared at a cabinet meeting that some judges in charge of the case had been the target of "threats and manipulation".

Defence prosecutors have not commented on the probe but at least three people -- a local and two foreign nationals -- are in preventive custody.

The head of the national roads office, Mutima Sakrini, is suspected of mismanaging the programme.

Two men -- US national David Blattner and Lebanese citizen Jamal Sammih -- are accused of collecting public money without starting work within the three-month deadline stipulated in the contract.

Tshisekedi meanwhile has deplored that some "arrested people are being subjected to bad treatment with the sole aim of getting forced confessions."

Prosecutors have also questioned officials from the Chinese state-owned China Railway Engineering Company which is building at least one flyover in Kinshasa.

Contracts 'over a drink'

China's ambassador to the DRC Zhu Jing has jumped into the fray, tweeting that the firm had "respected" the guidelines of Congolese authorities.

But opposition lawmaker Claudel Lubaya has alleged the contracts were awarded "over a drink," bemoaning a lack of transparency.

The awarding of the contracts were overseen by Vital Kamerhe, the president's cabinet director and a close ally.

Kamerhe's name has been cited by financial investigators probing the disappearance of $15 million from the public coffers.

Tshisekedi has said that a preliminary investigation has been launched but no details have emerged.

The president governs in a coalition with allies of his long-serving and corruption-tainted predecessor Joseph Kabila.

In September Finance Minister Jose Sele, a Kabila ally, called for an audit into the programme to build flyovers.

The country's influential Catholic Church's episcopal conference CENCO on Monday meanwhile called on the president to ensure that the investigations "are not an illusion".

"We are witnessing an unjustifiable and scandalous enrichment of a handful of political actors to the detriment of the vast majority of the population," CENCO said in a statement.

The bishops added that there was a "worrying tension" in the ruling coalition.

"The allies seem more concerned with their political position than with delivering services to people who continue to languish in misery," the statement said.

"It is unacceptable that the country has been taken hostage by an agreement which is, moreover, secretive," the bishops added, referring to the opaque agreement between Tshisekedi and Kabila.