By Thomas Hastings - The Conversation 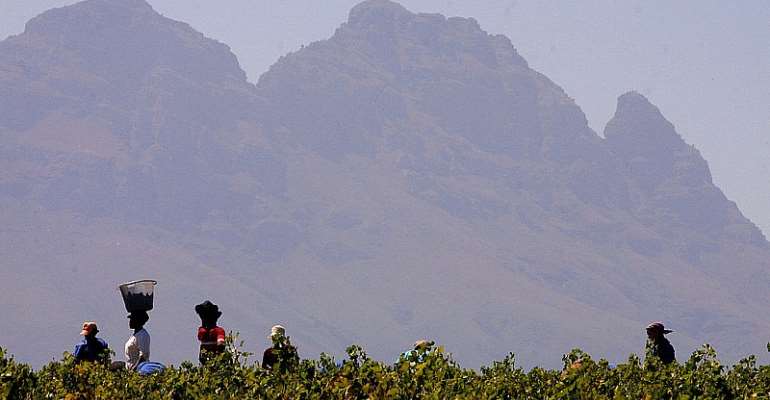 Workers harvest grapes on a wine estate in Stellenbosch outside of Cape Town. - Source: Anna Zieminski/AFP via Getty Images)

Echoes of apartheid-style exploitation of workers have resurfaced in recent years in South Africa. Debates around these malpractices were given fresh impetus four years ago with the release of a documentary, Bitter Grapes . Produced by Danish journalist Tom Heinemann, it featured workers from South Africa's winelands.

In a recent research paper I outlined the case for greater optimism around working conditions on wine farms due in part to the activism which helped create the documentary.

Key to the production of Bitter Grapes was the role of Ethical Wine Trade Campaign. This was a collaboration of worker organisations and solidarity movements across South Africa, Sweden, Chile and Argentina. All are important wine regions.

The campaign makes use of local knowledge about conditions in winelands in the Global South. This can be used to apply pressure to improve conditions in wine supply chains. An example is the role played by the campaign in connecting actors in Scandinavia and South Africa which informed and made possible the Bitter Grapes documentary. Subsequently the film has proved key in creating regulatory reforms.

The Commercial Stevedoring and Allied Workers Union played a vital role in the campaign.

The impact of Bitter Grapes reflects a strategy to connect activists in different places connected to common sectors. The links between South Africa and Scandinavia are not incidental. Nordic countries consume around 10% of all South African wine exports. This is mainly via the country's state monopoly retailers – Systembolaget in Sweden and Vinmonopolet. They have the sole licence for selling alcohol on the high streets of Norway and Sweden. Both governments have faced pressure to better regulate supply chains which are directly funded by tax payers.

In my paper I examined how labour can use networks to create public pressure on governments and firms to better regulate supply chains. This has the potential to improve working standards and opportunities. In particular, I look at changes in the regulation of work conditions that have resulted.

Several changes to wine farm regulation have emerged since Bitter Grapes on the back of moral and political appeals to European consumers.

The first set of changes is around formal state-led labour inspections. After Bitter Grapes the South African labour inspectorate investigated (and verified) several claims made in the documentary. Subsequently, the inspectorate has shown greater interest in the rural sector and has committed to more dialogue with trade unions in gathering intelligence about worker exploitation.

Secondly, there have been major changes in the private regulation of wine producers. A key private labour standards monitor in South Africa, the Wine and Agricultural Ethical Trade Association , has adjusted the way it operates. It has responded to concerns by committing to auditing farms more frequently. And it's agreed to use a more transparent grading system. This change will mean that poorly performing farms are now confronted with a genuine trading threat. Farms getting a low score in an audit are now – in theory – unlikely to be able to sell products to major retailers in Europe.

For their part, Vinmonopolet and Systembolaget have sought to improve standards in wine production through additional strategies. Vinmonopolet commissioned a series of independent audits and developed a new eight-point assessment for producers to adhere to. Findings confirmed a range of “critical” risks in several wine farms.

Systembolaget, meanwhile, has adopted a new and novel approach to reporting standards violations spurred by the Swedish trade union Unionen . This has included a Memorandum of Understanding with the International Food Workers' Federation. The memorandum is intended to support unions on the ground and offers a reporting mechanism for unions operating on the ground in South Africa, ultimately feeding information back to Systembolaget in Sweden.

The creation of progressive labour laws is important in securing improved standards of work. But laws in themselves remain limited in their effectiveness in industries where workers are hidden and isolated, and where inspectorates struggle to attend to the work realities on the ground.

That's why regulation is so important.

The case study I have done shows that workers are capable of influencing both private and public forms of regulation in their interests. This involves the creation of consumer boycotts, as well as supply lines of pressure from within corporate networks which producers will struggle to ignore.

Workers not only create pressure to reform laws and regulation: they can influence the strategies for policing labour standards too, for example by getting the labour inspectorate to be more active.

In this instance workers have helped re-orientate regulatory agencies away from merely nudging companies to improve conditions towards a stronger regulatory model with a threat of sanction.

Others could learn from the collaborative networks that were formed.

Despite this positive story it is important to stress that the job of improving labour standards in South African wine is far from finished. Issues such as evictions of workers and the over-reliance of casual labour (often via labour brokers) are not typically addressed by either labour inspectorates or private codes of conduct.

The need for transnational worker activism in monitoring labour standards is sure to remain relevant.

Thomas Hastings does not work for, consult, own shares in or receive funding from any company or organisation that would benefit from this article, and has disclosed no relevant affiliations beyond their academic appointment.

Article
Powered By Modern Ghana
COVID-19: how lockdowns affected health access in African and Asian slums
Why Kenya's pro-poor health financing reforms miss their mark
New fossil tracks belonging to human ancestors found in South Africa
Whistle-blowers in South Africa are treated as pariah's in spite of their moral courage
Peace in Sudan: patience is required for the long road ahead
The Missing Gap In The #EndSARS Struggle: Police–Government Relationship Or Police Independence?
GIADEC Not Conforming To National And International Transparency And Environmental Standards
What South African women told us about being the main breadwinner
We must make moral choices about how we relate to social media apps
COVID-19 Updates Live Dashboard
TOP STORIES