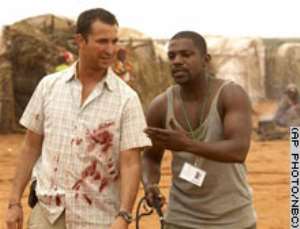 More often than not, television has looked away from the complex, searing reality of Darfur.

The three network evening newscasts devoted less than a combined 10 minutes so far this year to the political and ethnic conflict that has killed at least 180,000 and driven 2 million more from their homes in the western Sudan province since 2003.

On Thursday, an entertainment show will quadruple the broadcast news Darfur allotment.

In one scene, a mother in a camp for the displaced asks Carter about her hepatitis-stricken child, among the many beset by hunger, disease and violence.

"She wants to know if her daughter will die today or tomorrow," an interpreter says, speaking for the mother. Carter hesitates but can't deny the inevitability of her loss.

"Darfur is a glaring example of a situation in the world that people don't know enough about, that they need to know more about and, hopefully, help start to find solutions," said "ER" executive producer David Zabel.

The potential audience is big. The nightly newscasts on NBC, ABC and CBS attract roughly 7 million to 9 million viewers each while "ER," although no longer among TV's top-rated series in its 12th season, averages more than 12 million viewers.

The episode, "There Are No Angels Here" (10 p.m. EDT), is airing during a burst of attention to the situation that U.N. Secretary General Kofi Annan called "little short of hell on earth," with a deadline at hand for a peace accord between Sudan's government and Darfur rebels.

What's helped news cameras swing toward the despairing African region is the magnetic force of celebrity. After a trip to Africa, actor-activist George Clooney ("Syriana" and formerly "ER") was welcomed on TV news outlets, including CNN, ABC and Fox News Channel, to discuss what he had seen.

In Washington on Sunday, Clooney was among the celebrities who joined politicians, religious leaders and others to highlight the conflict and urge greater U.S. involvement. (See story.)

(President Bush gave his support to that and other weekend rallies, saying, "The genocide in Sudan is unacceptable.")
Using celebrity

The potentially awkward intersection of Hollywood glamour and tragedy, however, was made clear when NBC newswoman Ann Curry appeared on MSNBC to promote her interview with Angelina Jolie in Africa about the actress' support of a worldwide education drive -- and her pregnancy.

"I want to jump to a little lighter side dealing with Angelina. ... She looked great, by the way. ... How does she feel about all this international attention on Brad Pitt and Angelina Jolie having the baby in Africa and all the ins and outs of that?" he asked.

At least it's a meaningful use of celebrity, said "ER" star Phifer.

"These are real issues. It's a breath of fresh air to see something reported on Angelina Jolie besides her different way of raising kids, and her and Jennifer (Aniston) and all this other nonsense," he said.

The NBC medical drama is not jumping on a cause celebre bandwagon. Work on the Darfur story, which was introduced in previous episodes and culminates Thursday, began eight months ago. It's an extension of the show's previous attention to Africa in an arc that brought Dr. Carter to Africa to fight AIDS.

One of the groups that helped "ER" with the Darfur research used in writing the script, Doctors Without Borders (Medecins Sans Frontieres), lauded the episode.

"There is so little space on regular network news for coverage of underreported humanitarian stories that it's really great when a popular TV show like 'ER' can put resources into trying to show the challenges of a situation like we're seeing in Darfur," said Kris Torgeson, spokeswoman for Doctors Without Borders.

Coverage of Darfur has been dwindling: It was 18 minutes in 2005 and 26 minutes the year before, according to Andrew Tyndall, who publishes a weekly newsletter on the content of network newscasts.

Torgeson suggested the "ER" episode could increase public awareness of Darfur and perhaps encourage viewers to "want to learn more, and perhaps do something about it."

The financial commitment is impressive. The Darfur story line was filmed primarily in the South African desert and cost some $7 million -- more than triple the usual cost for a one-hour drama. It's the result of the clout "ER" chief John Wells has gained from the long-running show and the other NBC series he produced, "The West Wing" and "Third Watch."

Wells "is very bold in the sense that sometimes we'll do just what we think is the best way to use the platform that we have and not necessarily pander to what we think people want to see or what's the most popular thing to do," said Zabel.

That said, Zabel understands that viewers tune in for entertainment, not education.

"That's why we tried to search for a way to find some hope and promise of a better future in a situation as desperate and sad as what's happening in Darfur," he said.

Among the characters in the episode: a young couple battered by the conflict but laying claim to the future with the baby she's carrying.