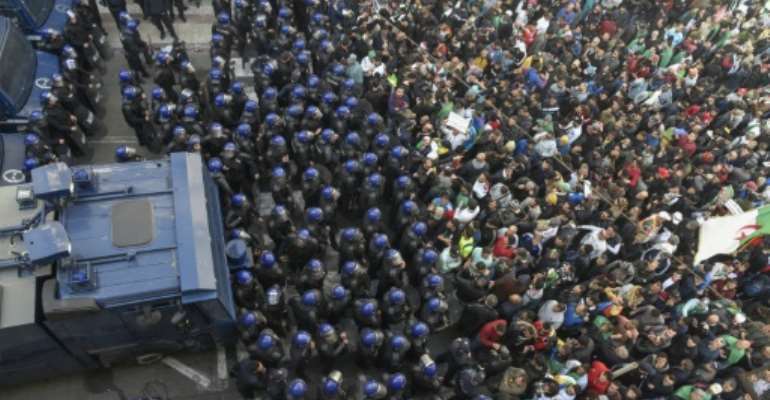 Algerian riot police block the progress of an anti-government demonstration heading towards the presidential palace in the capital Algiers, on Saturday. By RYAD KRAMDI (AFP)

Algeria's public prosecutor has requested a year in prison for Fodil Boumala, a protest movement figure, an advocacy group said Monday, as other demonstrators received jail terms and fines.

Boumala, a former state TV journalist who in 2011 co-founded an opposition group, was arrested in September and detained pending trial.

Prisoners' rights group CNLD said Boumala appeared for 16 hours in an Algiers court on Sunday, with lawyers for the defence wrapping up their pleas in the early hours of Monday.

The group said Boumala was accused of "undermining (national) territorial integrity", punishable by up to 10 years in prison, and the "distribution of publications that could undermine the national interest", which can be punished by a year in prison.

The verdict was delayed until March 1.

Also on Monday, 21 protesters received fines of around $410 (380 euros) -- a hefty sum in a country where the average monthly wage is about $325 -- for "unarmed assembly" and "disturbing the public order", the CNLD said.

The previous day, 20 other demonstrators were handed sentences ranging from three months to a year in prison for "undermining (national) territorial integrity", "unarmed assembly" and refusing to show identification documents to a plain-clothes police officer, it added.

Karim Tabbou, another key protest figure detained since September, will be tried on March 4, Nourredine Benissad, a member of the defence team, told AFP.

Journalist Sofiane Merakchi is set to be tried on March 15 for the "smuggling of merchandise" -- allegedly audiovisual material -- said Reporters Without Borders (RSF) correspondent Khaled Drareni, alleging the "real grievance" was that Merakchi had provided protest images to foreign media.

Mass protests erupted in Algeria a year ago last Saturday, in response to President Abdelaziz Bouteflika announcing he intended to run for a fifth term after 20 years in power -- despite being debilitated by a 2013 stroke.

The arrests of protesters increased from June as the army toughened its line on the demonstrations, which have continued despite Bouteflika's exit and the election of a new president in December.

In early February CNLD said 142 members of the now year-old protest movement, known as "Hirak", were still in preventive detention.