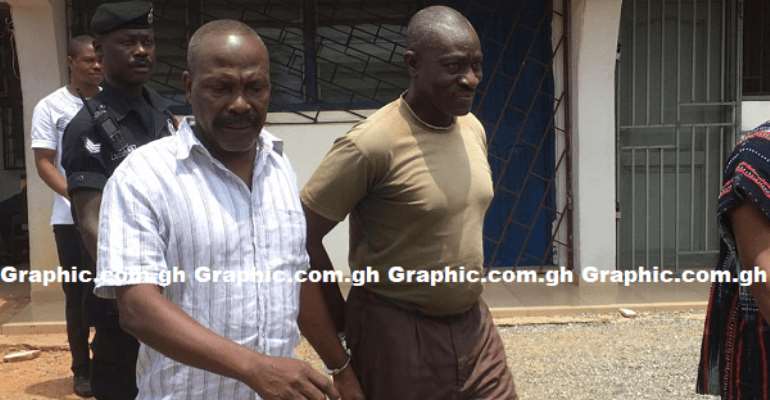 Gershon Akpah, a civilian employee of the Ghana Armed Forces (GAF) who was accused of being part of an alleged coup plot has been discharged by the Kaneshie District Court.

Akpah was set free on Thursday, February 20, 2019, after state lawyers decided not to prosecute him as part of the 10 people alleged to have hatched a plan to overthrow the government.

The number of accused persons will, however, remain 10 as state lawyers have charged another civilian employee of the GAF, Johannes Zikpi, in connection with the alleged coup plot.

The 10 individuals were accused of being members of Take Action Ghana (TAG), a group alleged to have hatched a plan to “destabilise the country and possibly take over the government”.

Tears of joy
It was music to the ears of Akpah and his sympathisers in the courtroom when Ms Hilda Craig, a Senior State Attorney, informed the court that the state was no longer interested in prosecuting him and, therefore, he should be discharged.

“We wish to withdraw the charges against Gershon Akpah. We pray the court to discharge him accordingly,” the Senior State Attorney said.

The magistrate, Mrs Eleanor Kakra Banes Botchway, therefore, set Akpa free after striking out the charges against him as withdrawn.

Akpa could not contain his emotions as he broke down after he was set free. After the hearing, some of his sympathisers praised God for the new status of their beloved.

Committal
Meanwhile, state lawyers have officially filed the bill of indictment which contains the charges against the 10 accused persons.

Committal proceedings are, therefore, expected to commence at the Kaneshie District Court on March 3, 2020.

During the committal proceedings, state lawyers will read out the charges against the 10 accused persons and also present the facts as gathered by the prosecution.

They will also present the summary of the evidence which will be used to prosecute the accused persons in the event they are committed to stand trial at the High Court.

After the state has presented its case, the accused persons or their lawyers will be called upon to speak.

When this is done, the magistrate will look at the case of the prosecution and the evidence before her and make a prima facie determination of whether or not the accused persons have a case to answer.

In the event the magistrate decides that there is a case for the accused persons to answer, she will indict them to stand trial at the High Court.

Alleged plot
Prosecutors have accused the 10 of being part of a group known as TAG, a non-governmental organisation (NGO) which is alleged to have planned to embark on demonstrations against the government and “possibly take over the government”.