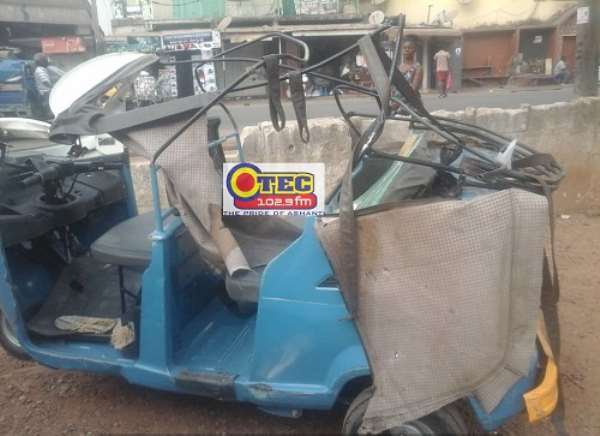 A woman believed to be in her 80s died instantly when a tricycle she was on board collided with a Sprinter bus at Asawasi near the Kumasi Central Mosque in the Asokore Mampong Municipal of the Ashanti region.

Otec News’ reporter, Agya Sam, who visited the scene, saw the woman’s cloth soaked in blood, blood on the ground and the crashed “body” of the tricycle, known as ‘Prygia’ left on the scene.

“The tricycle wanted to overtake another tricycle, not knowing that there was a school bus coming in the opposite direction. The two collided head-on, all the passengers in the tricycle fell off and I saw the woman lying on the ground with blood oozing from her mouth and nose” the eyewitness said.

“Some people called the ambulance but it didn’t come until some police officers who were passing by came to the scene and assisted in getting a private car to the convey the body to the Komfo Anokye Teaching Hospital (KATH),” he added.