Horse dreams: The plucky riders of the Central African Republic 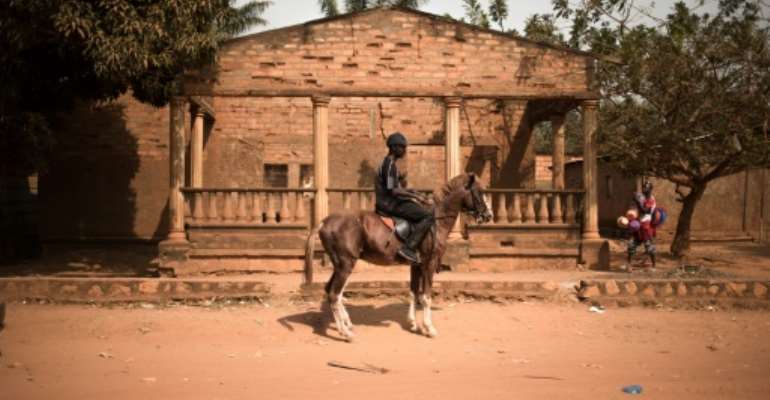 It's an arresting sight: In the middle of a dusty street in Bangui, a chestnut horse appears, trotting graciously among the bashed-up cars, motorbike taxis and crumbling buildings.

The rider is a well-known figure in the capital of the Central Republic of Africa: he's Soumaila Zacharia Maidjida, nicknamed "Dida," a former sprinter who set a national record for the 800 metres at the 1992 Barcelona Olympics and retains it today.

Horses were favoured by the CAR's former emperor, Jean-Bedel Bokassa, but their glory days ended tragically. By FLORENT VERGNES (AFP)

The diminutive twinkling-eyed man is one of just a handful of horse riders in the CAR, a country whose poverty, climate, war and overall chaos make it one of the world's least equine-friendly environments.

"Everyone knows Dida," the rider said. "When ministers and bosses want to go out on a horse, it's me they come to."

Dida dreams of setting up a horse centre but admits the vision is far away. To help feed his animals, he works as a guard.

The horse has a troubled history in the CAR, a landlocked country that gained independence from France in 1960 but has been buffeted by war and coups ever since.

For many people here, the horse is more associated with raids by marauding gangs who cross the border on horseback from Chad or Sudan rather than with polo or genteel rides in the forest.

Former general Jean-Bedel Bokassa, an admirer of Napoleon, had himself crowned emperor in 1977. He was deposed two years later. By PIERRE GUILLAUD (AFP)

Older citizens, though, remember its glory days under Jean-Bedel Bokassa, a horse-loving despot who in 1977 had himself crowned himself emperor.

Enamoured of the pomp and ceremony in Paris, Bokassa had a bronze and gold carriage shipped from France to parade around Bangui. On one tragic occasion, two of the poor creatures died of heatstroke under the pitiless tropical sun.

Bokassa imported hundreds of horses during his time and even set up a cavalry -- a unit that proudly officiated at major ceremonies.

People surround Bokassa's coach after his overthrow in September 1979. By (AFP)

As a child Dida watched the displays and became fired up by the idea of mounting a horse.

Bangui had two well-regarded equestrian centres -- one was for "high society", essentially French emigres, and the other was for the general public.

"At weekends, young people in the neighbourhood used to go for a ride for a few francs. It was the only leisure activity at the time," Auguste, who had an Arabian horse as a young man, said with a nostalgic sigh.

End of the era

In 1996, the halcyon days of the horse in the CAR came to a terrible end.

The army mutinied, triggering a cycle of violence and instability from which the country has never recovered.

Friends: Neighbourhood children get to know Dida's horse in a street in Bangui. By FLORENT VERGNES (AFP)

Bangui's two equestrian centres were abandoned and the horses were stolen, sold abroad... or ended up on market stalls.

"They gave me a big sum of money to sell my horse to an abattoir. I was broke at the time," said Auguste. "Today, when I think about it, I feel really sick."

Dida managed to save a few of the animals and today, despite the militia groups who control two-thirds of the country, still makes the epic drive to the Chadian border to bring back horses to Bangui.

"Horses are what I live for -- I can't do without them," he said with a shrug.

Memories of the glorious past have even stirred Jean-Bosco, an army captain, to try to revive the mounted guard.

Dressed in a splendid red vest, with a plumed kepi head and a sabre at his belt, he had come to Dida with a last-minute request for a riding lesson.

Rehearsal: Captain Jean Bosco goes on horseback for the second time in his life. By FLORENT VERGNES (AFP)

The following day, there was to be a military parade, and Jean-Bosco intended to be there to salute the head of state from horseback, bedecked in the CAR colours.

Bosco had only ridden once, which explained his haste to get in a second lesson before the big event.

But he was undaunted by the idea of a fall or a horsey mishap.

"I've been wanting to bring back the mounted guard for years," he said. "If I can take part in the parade, I hope I can persuade my superiors to back the idea."