Coronavirus: Chinese And Argentine Quarantined, Being Tested At Korle-Bu 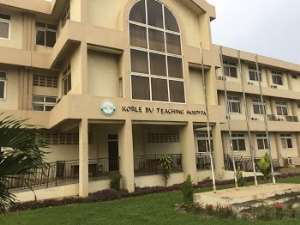 Two suspected cases of the novel Coronavirus have been reported at the Korle Bu Teaching Hospital (KBTH) in Accra, Ghana.

The two, a Chinese and an Argentine who have been staying together in Accra for days now. reported to Korle Bu on Wednesday evening with symptoms suspected to be similar to the virus which has claimed more than 500 lives in China.

The Director of Medical Affairs at the Korle Bu, Dr Ali Samba, in a radio interview on Accra-based Peace FM, monitored by Graphic Online confirmed the suspected cases on Thursday morning [February 6, 2020].

He explained that, blood samples of the two have been taken to the Noguchi Medical Research Institute for testing.

He said, the results of the samples are expected today [February 6, 2020].

According to him, the two have also been quarantined at the facility.

He further urged the public to remain calm as they await results from Noguchi.

Meanwhile, the National Coordinator for Port Health at the Ghana Health Service, Dr Dennis Laryea, said in another interview on Joy News said that one person was recently isolated at the Kotoka International Airport after showing symptoms of the virus.

He said the person was kept in isolation for about six hours.

The tests that were ran on him were negative.