Hajj Abdullahi Mukhtar: How do I Tell The Story 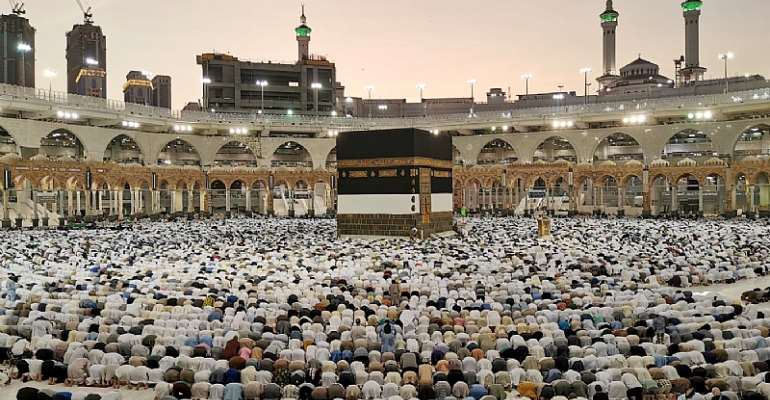 Yes. How exactly do I tell the story? To tell it as it is or as I know it; to capture the exact records; to reflects on the series of events that characterizes his journey to achievers podium; to relay the role played of major actors and bosses in this play; to damn the perception of being tagged ‘a historian with a peculiar interest’; to resists the temptation of dancing to uncertain drum of gallery; yours sincerely has resort to echo other peoples voice about Hajj Abdullahi Mukhtar sojourn in hajj administration in Nigeria.

Some stories are better told as at when due while others are hibernated to be relayed at the appropriate time. A lot has been written and said by eminent personalities within and outside hajj cycle on the indelible footprints of the man with cap in annals of hajj operations since Mr President sent names of new board members of NAHCON to the national assembly.

A lot has been said but not all have been said so, I am going to refresh my random access memory to recall some testimonies of hajj stakeholders when Abdullahi Mukhtar Muhammed was the executive secretary of Kaduna state Muslim pilgrims welfare board. His timeline in NAHCON will be deferred to another day. This piece will enable us to form an objective assessment of his capacity to leads and transform institutions or whether he is ‘a one-time achiever or it is simply a case of “success everywhere he goes”.

A one-time American President seems to have expatiated the popular adage by capturing the ups and downs, the hurdles, the character trait on the achiever's path which makes achievement great and worthy of honours.

He said: “…. It is not for the critic who counts, not the man who points out how the strong man stumbles, or where the doer of deed could have done them better. The credit belongs to the man who is actually in the arena, whose face is marred by dust and sweat and blood; who strives valiantly, who errs and comes short again and again; because there is not an effort without error and shortcoming; who knows the great enthusiasm, the great devotions; who spends himself in a worthy cause, who at the best knows, in the end, the triumphs of high achievement and who at the worst, if he fails at least fails while daring greatly, so that his place shall never be with those cold timid souls who know neither victory nor defeat”.

It is said that “the bravest sight in the world is to see a great man struggling against adversity”. However, “every great man, every successful man, no matter what the field of endeavour has known the magic that lies in these words: every adversity has the seed of an equivalent or greater benefit”.

Beyond rhetoric, it is a fact, indisputable, that Barr Abdullahi Mukhtar Mohammed (MON), the former Executive Secretary of Kaduna State Muslim Pilgrims Welfare Board, the former Commissioner in charge of Operations at national hajj commission and the outgoing Chairman of NAHCON has earned for himself, the field of hajj the first-ever National honour of excellence in hajj administration, Member of the Order of the Niger (MON).

The significance of this is in the fact that it was an unprecedented award in a rarely considered field within the scheme of our national priorities. Moreso, he was the youngest of all the recipients of National Honour in 2008.

This is to quote what the then head of NAHCON’s delegation to the state, Capt. Shehu Iyal, who also doubled as Special Adviser to the President on aviation, told the then Kaduna State Governor on 1st of March 2010: “Kaduna State is ahead of National Hajj Commission Operationally by three years margin, According to him “what the Executive Secretary of the board has done is more than a step in the right direction, he is somebody who is always thinking ahead and because of that I have a high respect for his person”.

On 5th of August 2010, the Sultan of Sokoto, His Eminence Abubakar Sa’ad praised the leadership of Abdullahi Mukhtar Muhammed as reported in page 4 of Daily Trust of Friday 6th August 2010 “ “On Preparations for this year’s hajj, the Sultan single out Kaduna State Muslim Pilgrims Welfare Board for praise and urged other states to emulate their early arrangement to avoid uncertainty”

The late former Minister of Communication, Dora Akunliyi in a commendation letter to Kaduna state Muslim pilgrims welfare boards during the reign of Abdullahi Mukhtar said. “Reports indicate that Kaduna State Pilgrims satisfied the tenets of the pilgrimage in accordance with the laws of the host country. They conducted themselves as good people of this great nation, Nigeria” she urged other pilgrims board to emulate the Kaduna board and do well during this year hajj” as reported by Daily trust page 9, Thursday 12 2010.

An extract from commendation by New Nigeria Newspaper, page 28 Friday, August 6, 2010, stated thus “ “In the annals of pilgrim’s services in Nigeria, the Kaduna State Muslims Pilgrims welfare board has been a force to reckon with. At least within the last decades or so. It has been in the limelight for one achievement or the other. Such indeed its consecutive lead in acquiring the largest number of pilgrims in comparison with its peers. That in itself was, by all means, a major feat, considering the fact that there are other states, which are more Muslim dominated. One wonders why teeming pilgrims from other parts of Nigeria annually clamour, to secure a seat in the state. It's only when it turns out not feasible that they reluctantly resort to looking elsewhere. That has been principally been the reason why the state’s pilgrims reflected divergent ethnic groupings making it a miniature in Nigeria”

The then-Speaker of the House of Representatives Rt. Hon Dimeji Bankole who also served as the national amirul hajj for 2008 hajj paid a working visit to Kaduna hajj camp before the commencement of pilgrims airlift and hear him. “I have gone round all the hajj Camps in the country, I must admit that Kaduna State has the best Hajj camp and organisations. I hope all other states will emulate their unique arrangements. “

The above present not a biography of the man but a nutshell a fraction of exposé from the legacy of an excellent hajj administrator who has broken, set and resets records.

The man being human is by no way perfect, a status solely reserved for Almighty Allah. Therefore, my objective is not to showcase any faultlessness. Rather it is a brief a compilation of what some notable personalities has said in the past about his sterling leadership qualities.