By Audu Abba Kurama with Aminu Abubakar in Kano 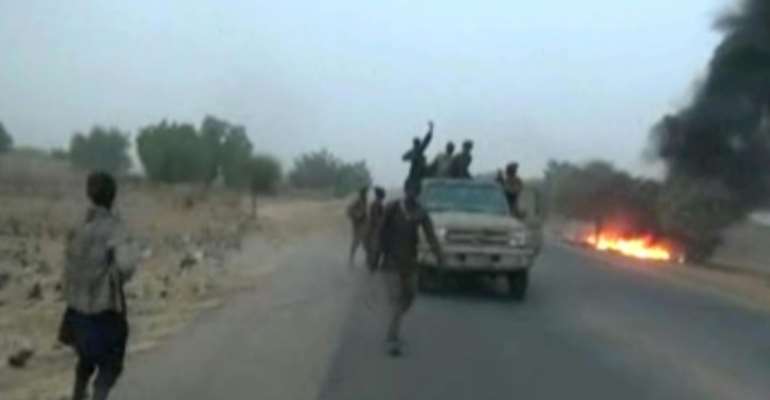 Dangerous roads: A screen grab from a January 2018 video released by Boko Haram, showing jihadists attacking the military on a highway near Maiduguri. By Handout (BOKO HARAM/AFP/File)

The bus driver sensed straight away that he and his six passengers were in trouble when the gunmen, dressed in Nigerian army uniforms, stopped their vehicle at a checkpoint.

They were on the main road connecting the city of Maiduguri in volatile northeast Nigeria with the rest of the country.

For weeks there had been reports of jihadists disguised as soldiers abducting travellers.

Now his own luck had run out.

"They took us at gunpoint into the bush," the driver told AFP, asking that his name not be used for his own safety.

"I spent four days in detention. I have never in my life felt the fear and trauma that I passed through in those four days."

The kidnapping around two weeks ago was part of a wave of identical attacks targeting the key Damaturu road -- the main lifeline linking Maiduguri and its roughly two million people to the outside world.

The city gate at Maiduguri in Nigeria, where travellers using the key Damaturu road have been abducted by jihadists. By FATI ABUBAKAR (AFP/File)

Since early December jihadists disguised as soldiers have been setting up checkpoints to snare and abduct unsuspecting passengers.

They appear to focus on Christians, aid workers and military personnel.

Some of those seized were executed on the spot. Others were taken as captives.

In late December the jihadists released a gruesome video showing them shooting and slitting the throats of 11 abducted Christians.

'Shot at any moment'

The bus driver and his passengers were kept in cells in a camp ringed with iron railings.

"The psychological torture was indescribable. I was living by the minute because I felt I would be taken and shot at any moment," he said.

The UN says there has been an upsurge in violent attacks across northeast Nigeria. By Audu Marte (AFP)

A "judge" would come to hear the cases of those being held and deliver a verdict within minutes.

When he ordered a hostage be dressed in an orange jumpsuit it meant they were sentenced to die.

After a few days it was the turn of the driver to be heard.

He was asked what crime he had committed but said he did not know; he had just been driving along the road when he was stopped.

This time the judge chose leniency. The driver -- a Muslim -- was ordered released, handed back the keys to his vehicle and escorted away.

"I don't know what befell my six passengers. I left them awaiting judgement at the camp," he said.

International aid agencies have sounded the alarm about the rising threat on the roads which is making tackling the vast humanitarian crisis in the region even harder.

The UN says recent weeks have seen an upsurge in violent attacks across northeast Nigeria and "an increasing trend of illegal checkpoints on major supply and commercial routes".

The terror on the roads has shaken residents of Maiduguri, a place that has already lived through 10 years of brutal insurgency.

The conflict has killed over 36,000 and seen hundreds of thousands of displaced people flood into the city.

The army has told those using the road not to stop at unofficial checkpoints and insists it has already re-established control of the main route.

But traffic on the road to Damaturu has dropped off dramatically and drivers wait for other vehicles so they can form convoys to travel.

Those who make the journey admit they are taking their lives in their hands.

As she boarded a bus to leave, Hauwa Musa told AFP that relatives had warned her off travelling on the road.

"But I told them whatever happens to me, it is destined by God," she said.

Another passenger, Mohammed Adam, insisted he had no choice but to make the trip for work.

"We have to go as we are struggling to feed ourselves and our families," he said.