Will Trump's Impeachment Trial Be A Short Process? 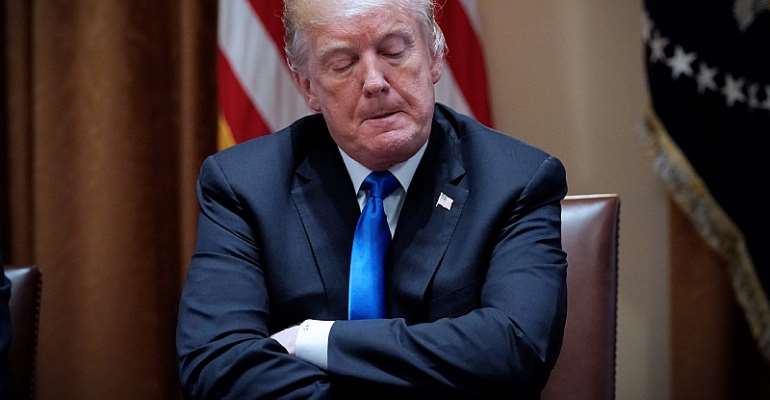 Eyes closed and through or a big show after all? While the impeachment trial against Donald Trump starts, there is bitter haggling for the rules behind the scenes, but for Donald Trump's lawyers, it's all very simple...their client must be "acquitted immediately", they demand in their first admission to the impeachment trial against the president.

Trump wants to get the very short trial, the issue of impeachment, over as quickly as possible, but this is not so easy for his allies to implement when the impeachment proceedings now start in the US Senate.

Although the Republicans have the majority in the chamber, they can set the rules. But politically, what the White House wants is delicate. And then there are the Democrats, who are constantly putting pressure on the House to call new witnesses. That's why there's a lot of wrangling going on behind the scenes, even though the trial is now gaining momentum.

On Tuesday the third impeachment trial in US history begins in the Senate - after a short prelude last week. The accusations against Donald Trump are clear: abuse of power and obstruction of Congress in the Ukraine affair. But the balance of power is also clear. It is however, highly unlikely that 20 Republicans would turn their backs on Trump and he would lose his office.

But it is completely open how the historic process will really take place - and what insights into Trump's behaviour he might still be able to bring to light.

Trump's most important man
Some of the rules for the proceedings in the chamber are strict: the senators act as jurors and must silently listen to the arguments of the prosecutors from the House of Representatives and the Trumps defense teams for the first few days. They may only submit questions in writing. The trial will be presided over by the presiding judge of the Supreme Court, John Roberts.

But republicans and democrats are bitterly disputing about the framework conditions behind the scenes. The whole thing is made more difficult by the fact that Trump himself has repeatedly vacillated between the desire for a short trial and a negotiation in which he can strike back at his political opponents.

The most important man for Trump is now Mitch McConnell, the 77-year-old majority leader of the Republicans in the chamber. He could dictate the rules with his simple majority. But he's in a very awkward position. He cannot grant Trump all his wishes, because he has to keep his faction together, in which there are different ideas about the process.

Marathon sessions at the start?
McConnell waited until Monday evening to present the first framework for the trial. That shows, he also wants a short trial.

McConnell only wants to squeeze the obligatory 24 hours for the initial pleas of prosecutors and Trump's defense attorneys into two days each. This would mean that the trial would start immediately on four days with twelve-hour sessions. The Democrats protested immediately, but now it looks like their prosecutors will probably speak on Wednesday and Thursday, and Trump's defense will speak on Friday and Saturday, four marathon sessions to start the trial.

But McConnell left the most contentious issue open: Will new witnesses be called? The Democrats are pushing this issue relentlessly. First, their leader in the House of Representatives, Nancy Pelosi, delayed the formal filing of the impeachment charge for four weeks, in the hope that new incriminating allegations would come to light.

And so it happened: On the one hand, the independent Federal Court of Auditors found that Trump had broken the law by withholding military aid to Ukraine, a fact that its lawyers denied.

A new prosecution witness
On the other hand, the intelligence committee published numerous documents in the possession of Lev Parnas. The man, just released on bail from prison, was the central henchman of Trump's partner Rudy Giuliani in influencing the Ukrainian government. The documents show that Parnas maintained close contacts with Trump's associates in the matter.

Parnas also appeared on television during prime time and in extensive interviews he made Trump personally responsible for the smear campaign. "President Trump knew exactly what was going on," he said. Parnas even provided evidence for some of his statements, others remain assertions for the time being.

In any case, it was serious allegations against Trump that made it difficult for those who wanted to end the proceedings in no time.

Bolton, Mulvaney - and Biden's son?
The Democrats are hoping for a group of moderate Republicans who will also be in favor of subpoenaing witnesses. The names of four senators are mentioned repeatedly and public pressure is being exerted on them. Among them are Trump critic Mitt Romney of Utah and re-elected moderates Susan Collins of Maine. They all know the polls: according to a recent survey by CNN, a good two-thirds of Americans are in favor of witnesses being called.

At the top of the Democratic list are Trump's Chief of Staff, Mick Mulvaney, and former National Security Advisor John Bolton. Both were central figures in the Ukraine affair. Trump is determined to prevent them from testifying.

But for the Democrats, the pressure for witnesses is also delicate

Republicans may insist on calling witnesses in return, witnesses the Democrats feel uncomfortable with, such as Hunter Biden, son of the former vice president. As is well known, Trump wanted to encourage the Ukrainians to announce investigations against him - because of his well-paid work for the Ukrainian gas company Burisma.

The Democrats actually wanted to prevent his appearance. After all, the trial is about Trump's misconduct and not about what the accused is accusing his opponents of. But perhaps that is the price they will have to pay to be able to summon witnesses themselves.