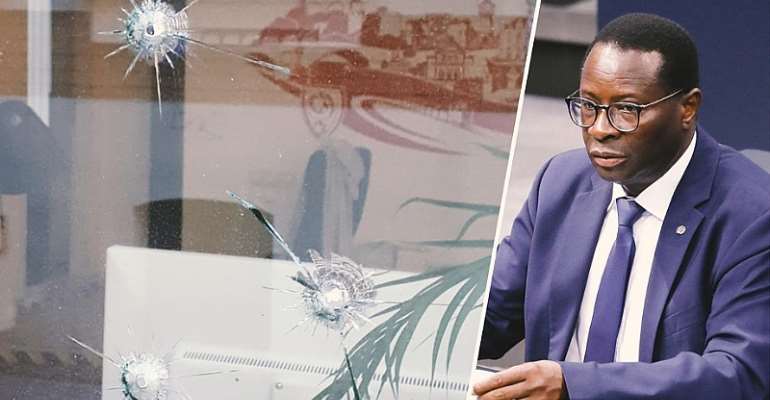 Shots at the office: SPD member of parliament Karamba Diaby posted the photo of the window with the bullet holes.

In the German City Halle, unknown perpetrators shot at the office of SPD member of parliament Karamba Diaby. The politician does not want to be intimidated by this.

Karamba Diaby (Twitter)
✔@KarambaDiaby
On Wednesday morning, bullet holes were noticed at my citizen's office. An office window with my portrait shows several bullet holes. The police and the State Security are investigating.

A photo showing bullet holes in the window of the Citizens' Office was shared by the politician on Twitter. He writes: "On Wednesday morning bullet holes were noticed at my Citizens' Bureau. An office window with my portrait shows several bullet holes. The police and Homeland Security are investigating".

One of the employees noticed the bullet holes at around 9.30am and called the police immediately. "We are shocked". There had also been damage before but never in this form.

According to Dr. Diaby, he had once opened the citizens office in Halle in order to talk directly to the people in the centre. Of course I am not indifferent to this, but I am not intimidated. He rejects any form of violence and instead insists on talking to each other. "Violence cannot be a solution."

There is currently no surveillance camera at his citizens' offices. The politician does not like the idea of installing one now. He trusts the investigations of the police and state security to begin with.

Foreign Minister Heiko Maas reacted indignantly to the incident in Halle. "Simply incomprehensible. Disgusting and cowardly. Full support, also for the whole team", the SPD politician wrote on Twitter. "We will continue to stand by your side for a free, tolerant and diverse democracy. Now more than ever!"

In recent weeks there have been repeated attacks and threats of violence against politicians, as well as paint and arson attacks on buildings and cars of politicians.

"We need the hand of God like never before against economy d...
5 minutes ago