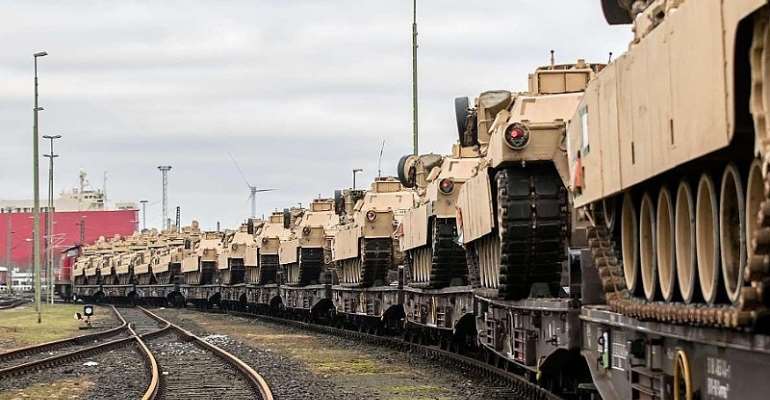 With 20,000 soldiers, it is the largest US troop transfer to Europe since 25 years. Germany becomes the central hub in the "Defender Europe" exercise with hundreds of tanks on roads, rails and water. In Europe and the USA, the final phase of preparations for a massive show of strength has begun. The US forces are rehearsing with NATO partners to deploy enormous forces in a short time for a war in Eastern Europe. A large part of the war material comes from the USA and is transported right across Europe with Germany as the central hub.

Next week, the military will discuss details in a Berlin barracks. But much is already known. The exercise may lead to disruptions in many parts of Germany and is a challenge for the German Armed Forces.

When will there be disruptions?
The exercise will start in January. The main deployment period of the US forces in Europe runs from February to May. From the USA alone, there are 8,600 wheeled vehicles and more than 1,100 tracked vehicles. However, the majority of these will not be moved eastwards until April and May. During the Easter holidays (Easter Sunday is 12 April), the situation is expected to remain quiet. On the roads, transports are to be on the move mainly at night, so that there are few disturbances. From mid-May onwards, the return transport will begin. It should be completed in July. Military convoys will be on the road again then, but not so many vehicles in a short time.

How do material and soldiers get to Europe?
For relocations, machines will land at the airports in Berlin-Tegel, Frankfurt, Hamburg, Munich, Nuremberg and Ramstein, according to State Secretary of Defence Peter Tauber. Bremen could be added. Only a fraction of the materials will arrive by plane. Battle tanks, armored personnel carriers, howitzers and other equipment will be delivered by ship. From the ports of Antwerp, Vlissingen and Bremerhaven, the journey will later continue through Germany.

How is the traffic in Germany?
Some of the materials will be transported further by water. The inland ports of Duisburg, Bremen and Krefeld are planned for this. The heavy equipment will be transported mainly by train. But there will also be a lot of military on the roads. Three large axles are planned in Germany. From Düsseldorf it will continue on a northern route via Hanover and Magdeburg to Frankfurt/Oder. The southern route from Dusseldorf will lead via Mannheim, Nuremberg and Dresden to Görlitz. In addition, convoys are planned from Bremerhaven in a north-south direction along a connection Hanover-Frankfurt/Main-Mannheim.

Can the structures cope with this?
The preparations go back a long way, fixed routes were checked to see whether they were designed for the heavy loads. Tanks and other large US Army equipment were inspected, weighed and measured in Mannheim by the German Armed Forces Logistics School. The exercise was also the occasion throughout Europe to renovate or reinforce structures accordingly. However, military experts do not rule out the possibility that the heavy equipment could also cause damage.

Where will the exercise take place?
The exercise covers ten countries, focusing on Poland and the Baltic States. Within the larger scenario, there are also other exercise scenarios and locations in Germany. In Grafenwörth in Bavaria and at the Bergen training area in the Lüneburg Heath, combat will also be practised. Part of "Defender Europe" will also be the handling of additional attacks in cyberspace. New equipment and common secure communication will be tested. A total of 37,000 soldiers from 18 countries will practice. In addition to the 20,000 US soldiers from the USA, 9,000 are already stationed in Europe.

Is all the material being shipped from the USA?

No, but in addition, the US Army also takes out war material that is usually kept in huge guarded warehouses. From a total of four so-called "Army Prepositioned Stocks" 13,000 vehicles and containers are to be brought in. In Germany there are such warehouses in Dülmen, Miesau in the Palatinate and temporarily in Mannheim. Within 96 hours, the material is to be complete with the combat units. An armoured brigade of the National Guard will receive M1 tanks as well as Paladin howitzers from European storage locations of the US Army for the exercise.

What happens along the routes?
The soldiers will have to stop along the way, spend the night, repair defects. A number of locations are planned for this purpose, and there are rest areas along the transport routes: in Rheindahlen near Mönchengladbach, in Augustdorf near Bielefeld, Burg near Magdeburg, Lehnin near Potsdam, Upper Lusatia, Garlstedt near Bremen, Stadtallendorf near Marburg and in Frankenberg (Saxony). The Bundeswehr is also creating so-called "Convoy Support Centres" at three of these locations, where there will be extensive infrastructure for the large transports: at the military training areas in Garlstedt near Bremen and in Upper Lusatia, and in Burg near Magdeburg. A special tank facility is being built at the Bergen military training area north of Hanover.

What is Germany contributing?
In the USA, the support provided is highly valued and appreciated. The commanding general of the US forces in Europe, Christopher G. Cavoli, spoke in a press conference of support at a "very significant level". The Bundeswehr coordinates and secures the transports in Germany, providing most of the quarters and supplies for the units passing through. This is called "Host Nation Support". 1,500 soldiers are deployed in Germany at peak times just to support the Americans, 1,200 more are taking part in combat exercises.

Martin Schelleis, Inspector of the Armed Forces Base, calls "Defender Europe" a challenge, not only for the German Armed Forces, but also for the partners in the state authorities, the districts and the police. "Not least also for the German population. We are making every effort to minimize the impact of traffic, but it will be noticeable that we will see military transports on German roads." He asks for your understanding for the inconvenience.

What is the point?
The annexation of the Crimea has led to a rethink on the part of the USA and NATO, because Russia is again being treated as a potential threat. The exercise is about gaining experience and showing teeth with the hoped-for process. In the event of a crisis in Europe, the US and its allies must be able to move large numbers of units quickly and cooperate effectively. "This capability is important for showing strength in the short term, our readiness to act calms our allies and deters potential adversaries," said General Cavoli, commanding general of the US forces in Europe. The exercise will also be a test for NATO's new "Joint Support and Enabling Command", which is still under construction in Ulm in Germany. Its task is to ensure that military equipment and troops quickly cross national borders in a crisis situation. As a logistics command, it coordinates the handovers.

Are there protests?
Left-wing members of the Bundestag are behind an initiative called "Stop Defender 2020", which is intended to "support the flow of information and mobilisation against this comprehensive war simulation" on the Internet. In at least two cities, meetings of the Network Peace Cooperative are planned for January, including the Attac and Rising Movements. Blockades will also be discussed there. Opponents criticize above all that Russia is being provoked, which could lead to further escalations. The time frame is also criticized, on May 8, Russia will celebrate the 75th anniversary of the victory over the "German Reich" in World War II. In addition, climate protection is cited as criticism against the large-scale exercise.

Otherwise, the political situation has been largely quiet so far. During a 2016 manoeuvre in Poland with 30,000 soldiers, former Federal Foreign Minister and now Federal President Frank-Walter Steinmeier had criticised the situation: "What we shouldn't do now is further fuel the situation with loud sabre rattling and war cries. Anyone who believes that symbolic tank parades on the Alliance's eastern border will create more security is mistaken. He had been heavily criticized by the CDU. Russia regularly organizes military maneuvers on the border with Poland and the Baltic countries.

The Iran crisis
A spokesman for the US Army in Europe stated as recently as Sunday that the current status of planning for "Defender Europe" was unaffected by developments in the Middle East: "We are monitoring the situation closely. The situation is said to have remained unchanged for the time being, even after the Iranian missile attacks on US targets in Iraq.