The Beauty Of Togetherness 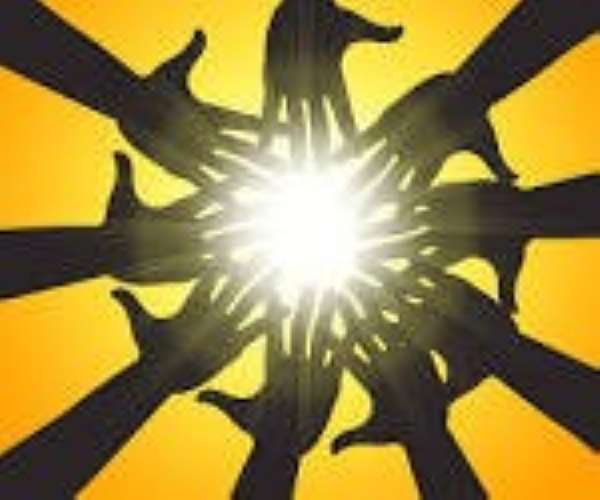 When our forebears lived and practised their own form of democracy, they were like the proverbial unbreakable broomsticks.

It was at the time the would-be leader is spotted at his infancy, and be groomed to a leadership status giving meaning to; not all people were born to royal homes, some are trained to be royals. The greatest English writer, William Shakespeare once said: "some are born great, some learn to be great, and some have greatness thrust upon them".

Before Shakespeare's sayings, the African had known and practised that for long.

Positions like Kyiame (linguist/spokesperson) was reserved for the eloquent, being him a royal or not. So it was with Adomakomahene (Chief Historian) in the palace, and many other positions that with time we'll learn of.

There has been kingdoms in Africa, my native Goka Kingdom is an example, that have even installed outsiders from the royal household to royalty positions like Kings and Queens due to their capabilities.

No wonder Kwame Nkrumah and the nursing mothers of Ghana's Independence dreamt for a United Africa that would bring all great minds behind one table to reason and pursue the path of togetherness in building a Paradise status for the Black race.

The great academics, William Bubois and George Padmore, are examples that were welcomed in Ghana at the dawn of our independence for such progressive course.

In his farsightedness, Nkrumah saw how divisiveness will stunt Africa's growth. In his writings pro and post independence, he saw the doings of some imported religious bodies as a pawn that was planted by the imperialists in Africa to fight against the togetherness that was the right ingredients for our better growth and development.

Speaking the truth against the activities of such religious bodies, Jehovah Witness being an example, they branded Nkrumah as "Antichrist", and a worshiper of KankanNyame (idol worshiper/devil).

Our own Ghanaian people bought into that.
Nkrumah's beautiful dream for Africa died prematurely and left Africa a malnourished orphan, when he was ousted in a coup d'etat in 1966.

Today, as we need togetherness the most, same imported religious bodies teach their faithfuls to denounce our national pledge, anthem, and election of leaders.

Some even go to the height of stopping their youth to stand for political positions, calling such as "devilish" and "worldly".

Today, our governance system, the democracy we practise in Africa has polarised us to the point that, our goals are no more geared at developing Africa, but our individual empires.

And always, when these people who represented a political or religious groupings win, their aim is not to look at the interest of the ordinary Ghanaian, but they who belong to his circle, or is willing to join that circle.

The losers in such elections, irrespective of how progressive their thinking is, they would be relegated to the background by the victor.

That is the bane of our progress as Ghanaians and Africans in general.

Even, with the example the Chinese are presenting to us as to the beauty in collective building as practised by our forebears, our detractors still paint that as dictatorial and a bad example.

Meanwhile, the Asian giants are growing speedily socioeconomically than any other race on earth today.

Now is the time we let our failure in the past years teach us a bitter lesson that Sankofa (returning to the old ways of togetherness) is our sure bet to development.

If we didn't know, we've been made aware now.

In unity, togetherness, outside partisanship and religiosity, we shall build a strong impregnable force for Ghana and Africa.

Savannah: NADMO to clear buildings on waterways after heavy ...
43 minutes ago