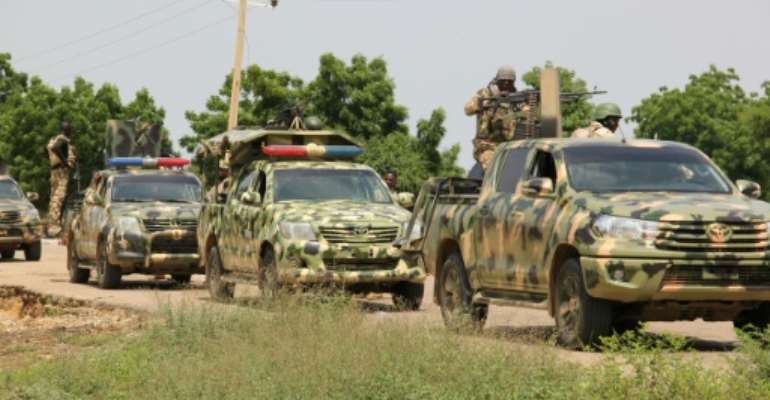 Nigerian soldiers have pulled back into "super camps," which critics say has left small towns vulnerable to attack by the Islamic State West Africa Province (ISWAP) group. By - (AFP/File)

Late Thursday, jihadists from Islamic State West Africa Province in more than a dozen pickup trucks fitted with machine guns stormed a security post manned by a civilian militia group in the village of Mamuri, in Borno State, according to the sources.

"We lost 14 men and a mobile policeman in the fight with terrorists from ISWAP," militia leader Babakura Kolo said.

"Our men ran out of ammunition which gave the insurgents the upper hand," Kolo said.

The militia was comprised of local hunters across the northeast along with the state funded Civilian Joint Task Force, an armed vigilante group, said another militia leader, Ibrahim Liman.

In a statement released Friday, ISWAP claimed the attack, saying its fighters had killed 15 "pro-Nigerian government militia" and captured two all-terrain vehicles along with weapons and ammunition, according to SITE Intelligence, which monitors jihadist websites worldwide.

Hundreds of vigilantes and local hunters from the region have been sent in recent months to the town of Gubio, near Mamumi, 80 kilometres (50 miles) north of the Borno State capital Maiduguri to guard against increasing jihadist attacks.

The redeployment of vigilantes to Gubio accompanies a new military strategy that has pulled soldiers back into "super camps," which critics say has left towns more vulnerable to attack.

In late September, five civilian militia fighters were killed by ISWAP militants in a similar attack.

ISWAP broke away from Boko Haram in 2016 and has ramped up attacks against the military since mid 2018, repeatedly carrying out deadly strikes against soldiers.

Recent attacks on civilians have also been blamed on the group.

The decade-long Islamist insurgency has killed 35,000 people and displaced around two million from their homes in northeast Nigeria.

The violence has now spread to neighbouring Niger, Chad and Cameroon, prompting a regional military coalition to fight the insurgents.