Who are the five men bidding to be Algeria's next president? 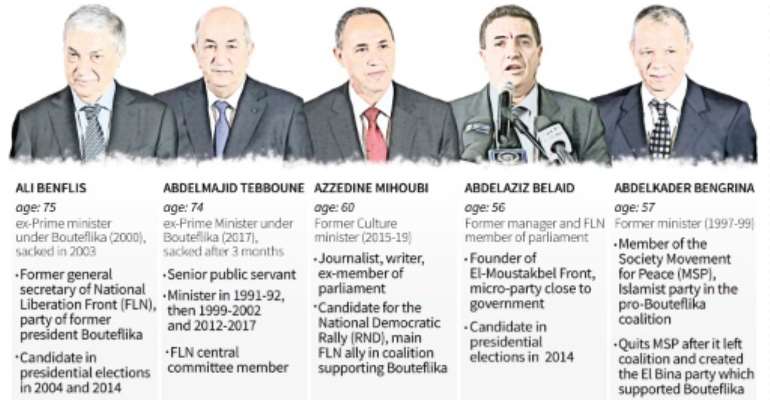 Five candidates are running to be the next president of Algeria and replace long-time leader Abdelaziz Bouteflika in Thursday's widely unpopular elections.

Here are thumbnail portraits of the five hopefuls:

He served in Bouteflika's government from 1999 to 2002 as communications and then housing minister. Tebboune returned as housing minister in 2012 to 2017 when he was briefly appointed prime minister.

Since the start of the campaign, Tebboune has sought to distance himself from his years of service under Bouteflika, and had been seen as a front-runner in the polls.

But a campaign against the former senior civil servant by media groups close to the ruling powers has seen his support fall.

A former secretary general of the FLN, Ali Benflis is running for the third time in a presidential election. A former magistrate, and then lawyer, he served as justice minister from 1988 to 1991.

The 75-year-old was Bouteflika's campaign director in 1999, and became prime minister in 2000. The two men had a close relationship until 2003, when Benflis made it known that he intended to run against the president in the 2004 elections.

He was heavily defeated by Bouteflika in the first round, gaining just six percent of the vote. Undeterred, Benflis ran again 10 years later as an independent in 2014, only to lose again.

For the past 15 years, Benflis has touted himself as Algeria's main opposition figure, but his critics see him as another of the old guard.

Apparently the army's preferred candidate, journalist, writer and poet, Azzedine Mihoubi, 60, was a member of parliament from 1997 to 2002.

He held various posts in state institutions including as head of the public radio, and the national library before entering Bouteflika's government. After being communications minister from 2008 to 2010, he became culture minister in 2015 until March 31 this year, two days before Bouteflika resigned.

In July he became the head of the National Democratic Rally, a coalition ally of the FLN. He is said to be close to former prime minister Ahmed Ouyahia, now serving 15 years for corruption.

The youngest candidate running, Abdelaziz Belaid, 56, is a long-time politician. In 1986 he joined the FLN, and became the youngest member of the party's central committee. He also ran one of the party's youth organisations for a decade from 1997.

He split with the FLN in 2011 to found Front El-Moustakbel, which supported Bouteflika. Belaid stood in the 2014 presidential elections, garnering just three percent of the vote.

Islamist former trade unionist Abdelkader Bengrina became tourism minister from 1997 to 1999. His party, the Movement of Society for Peace (MSP), is close to the Muslim Brotherhood, and supported Bouteflika's government as part of a presidential coalition until 2012.

But Bengrina, 57, broke away from the party a few years earlier to found with other MSP dissidents a new Islamist movement and then the El Bina party, which supported Bouteflika.