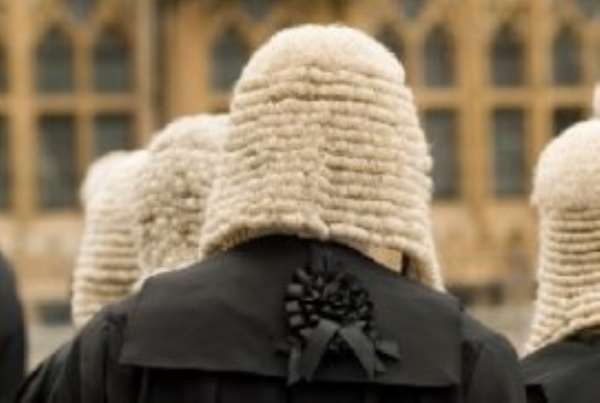 In Ghana, institutional corruption is known to be ruining the economic development of the nation. The monies meant for developing the nation to better the collective living standards of the citizenry are embezzled by a few people in positions of trust. Some of these people are politicians, the police personnel, those in the judicial service, especially judges and court registrars, Custom service personnel, and headmasters of our Secondary Schools before the introduction of free Senior High School education which is making it a bit harder for them to demand payment of bribes from parents before giving admissions to their wards.

If those employed and paid by the government to judiciously ensure that wrongdoings are curtailed, if not totally eliminated, from the country, are themselves the masterminds and/or orchestrators of the vices, then Ghana has got a serious problem of non-development on her hands. Their corrupt attitude begets all forms of crimes and it empowers criminals who are able to bribe them to become daring in their trade.

We should not sit on the fence watching while these policemen and women and judges continue to flout the laws of the land with impunity, as though they are above the law. If we really wanted Ghana to develop, indeed to shine as the black star of Africa worthy of emulation by other African countries, then we have the collective obligation to fight their fondness for corruption. Once they cease being avidly corrupt, Ghana will be on the correct path to economic recovery for the betterment of all of us.

How do we then get them to end their absurd infatuation with corruption, where the police accept bribes on the roads in broad daylight with judges taking bribes to sell justice to the highest bidders to deny the poor and the needy justice in Ghana? The court registrars are noted for taking bribes to either hide or remove vital evidentiary documents from some litigants’ dockets to finally culminate in guilty verdicts being pronounced by judges against them. We have to report them as much as we can, especially when an official provision is made available for that recourse.

My excitement could not be overemphasized when I heard the current Inspector-General of Police, Mr James Oppong Bonuah, declare that anyone who sees a police officer taking bribe or involving themselves in corrupt practices must report them with evidence to an office (Police Complaint Desk) designated for receiving such complaints for action to be taken against them. He provided telephone numbers – 0550323323/02075000156 and WhatsApp number +233 – 206639121. Get your evidence on recorded audio or video on your smart phone and send it to them.

The outgoing Chief Justice Mrs Sophia Akuffo has of late been persistently advising Ghanaians not to give money or any form of gift to a judge when they pronounce judgment on your case or when they are preside over your case. She says, expressing your appreciation for such a judge by simply saying "thank you to him or her is enough". The judges are paid by the government to render a fair service to the people so she sees no reason why people should gift judges with money or other things when they decide their cases. For her, a judge taking a gift from anyone because he/she has dealt with that person's case amounts to corruption.

How can we enforce the advice by the Chief Justice then? It is only by reporting the corrupt judges and court registrars that we can adhere to her request. Once the corrupt officials are reported and they are subsequently punished, their desire for accepting bribes to directly or indirectly encourage criminalities in Ghana will have been curtailed or stopped. They will be scared shitless to take bribes knowing when they are reported, they will get the boot from their job. They will then have become innocent, trustful and as harmless as a decapitated snake.

I have taken the initiative to enforce the Chief Justice's admonition. I have reported the judge who was at the Kumawu District Court up until about two weeks ago when he is understood to have been transferred and replaced by another. He is said to be one Abudu Issifu Asipe or whatever. He is alleged to have accepted bribe along with the bailiff and the registrar to pervert the course of justice. I have reported him to the General Legal Council to be investigated following the allegation of corruption against him by one Madam Berhene, an obviously dissenting member of the Kumawu Ananangya royal family.

From the recorded audio below, the public must please be judges unto themselves on whether or not bribery did take place as alleged by Madam Berhene.

Should we fail to report such malpractices perpetrated by our judges, crimes will never cease in Ghana. When crimes continue, the nation will never prosper as it should. Such corrupt practices by the Ghana judicial service have the potential to scare away foreign investors. Without investments by both locals and foreigners, creation of jobs for the people, especially the youth, will be minimal if not non-existent.

Another judge has exhibited professional conduct worthy of praise and emulation. He is in the Ashanti region. To maintain the privacy of the person to whom the matter concerns, I shall not mention the name of the judge or go into the detail of things. Anyway, after deciding the case before him on the merit of the evidence provided, as it is normally expected of any judge of integrity, the truly innocent person in the case to whom the favourable verdict was finally pronounced by the judge, wanted to offer him a thank you gift. The judge refused it outright and also warned them not to come to his house. He said, “Nobody should please come to my house to see me. I will not accept any gift of any sort from anyone. I only did my job as I should, based on the credibility, permissibility and acceptability of the evidence of which the other party could not dispute. I am paid by the government for doing my job so I don't need anything from anyone"

Yes, this is the type of a judge Ghana needs in abundance but not those who take bribes to twist justice, even though they are paid monthly salary by the government. This is the type of judge Ghana needs in every court but not those yielding in to the pleas of some supposedly traditional overlords to twist justice in their favour even if the overlord is possibly the guilty party in the case before the judge.

To conclude, Ghana can prosper with the current incorruptible president able to achieve most of his campaign promises if those officials entrusted to enforce the laws of the land will behave themselves responsibly contrary to their present obnoxious corrupt attitudes. They can be obliged to stop their dismal behaviour if the citizens are ready to report them for action to be taken against them.

I will not spare the rod to spoil the child hence reporting that judge who in my estimation has accepted bribe as alleged by bribe-giver Madam Berhene.

The author has 2214 publications published on Modern Ghana.