NDC Inaugurates a Branch at The Hague, “the Seat of The Government” 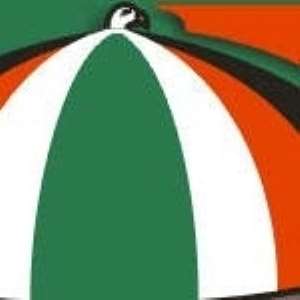 With the National Democratic Congress becoming stronger and garnering its muscles to wrestle power from the ineptitude, family-and-friends' government of President Nana Akufo-Addo on 7 December 2020, the party has resolved to further strengthen its base in The Netherlands and other parts of the European Union.

On the 7th December 2019, exactly one year before Ghanaians are going to the polls, NDC Chapter officials travelled from Amsterdam, the country's capital to The Hague to inaugurate a branch, making it the 5th branch to be inaugurated in a small but powerful European country. The National Democratic Congress had its first Diaspora branch established in Amsterdam since 1993. But for the party's Diasporas branch to qualify to be called a Chapter, Almere Branch was inaugurated some five years ago, followed by two interim branches at Utrecht and Rotterdam, bringing the branches to five.

At The Hague, also known as “The Seat of the Government” the branch interim executives who were made up of Hajj Hamza, Chairman; Yunus Barry, Secretary; Jibril Koanda, Organizer; Awudi Klaus, Treasurer; and Ayisha Mohammed, Women Organizer, were sworn into office by NDC Holland Chairman, Mr. Fred Morgan. It was a small but unique gathering which brought like-minded people together for good reasons.

The Chapter Delegates from Amsterdam were made of Mr. Fred Morgan, the Chairman of the NDC Holland; Mr. Mubaraq M. Fuseini, the Secretary, NDC Holland Chapter; and Mr. Kwame Abujo Acheremu, the NDC Holland Treasurer. Also, in attendance were branch members from various branches who joined their new comrades to make the inauguration a success one.

While delivering his keynote address at the opening function of the meeting, Mr. Morgan said: “It is a crucial meeting as the party will make an endeavour to formulate a roadmap to take the vision and mission of the party to Ghanaians in different nook and corners of the Netherlands and other European countries”. He was also with the belief that their presence has ushered in an era of new progress for NDC. He also told them that, it is a responsibility for the Chapter to carry forward the onus to represent the Diasporas aspiration of Ghanaians at the national level. And NDC has remained committed and it will further continue to fulfill its agenda for all Ghanaians. The Chairman tasked the interim branch executives to keep the branch together till a formidable timetable is set for a transparent election. On the same note, he advised them to adopt a branch in Ghana, as has been the campaign embarked on by the National Organizer, Comrade Joshua Hamidu Akamba.

Earlier on in the programme, the Chapter Secretary, Mr. Mubaraq M. Fuseini, admonished that, what was expected of them as a branch, is to win more souls for the party and express the good news of the NDC to all. Interaction with some members, he assured them that, without a doubt, the Ghanaians voters will vote massively for H.E. John Dramani Mahama on 7 December 2020.

The interim Chairman, Hajj Hamza, accepted the challenge and promised to make the branch one of the active branches in the Netherlands. He also advised his other executives to be mindful of their utterances and provocations, especially from the opposition party. He went on to encourage his team to do their utmost best to make NDC great and strong. The Hague branch Chairman said, “The recognition of NDC branch at the “Seat of the Government” is a great achievement for us all. I take this opportunity to congratulate my comrades, who have worked tirelessly here in The Hague to let this dream come true. It is a moment for all of us to remember the ideals of Dr. Tony Aidoo, our former Ambassador, whose contribution to the unity of the NDC Holland Chapter has led this possible. Though his tenure of office ended three years ago his ideas will live forever with us.”

In a brief contribution Mr. Kwame Abujo Acheremu, the Chapter Treasurer, who fought tirelessly to make sure the branch is formed said “the beauty of recognition of a party branch is a testimony of how brick by brick and drop by drop an ocean is created. Party branches are one of the most critical structures of any political party because they are the local geographic units of the political party, they play a central role in mobilizing people about what the party stands for.” He further stated that “the recognition of your branch has proved a point that irrespective of the differences in the experience of politics and diversity when coming together we can achieve greater heights, and our one goal is to beat NPP at the battlefront”.

In conclusion, The Hague Branch has become part and parcel of the entire National Democratic Congress political party structure. And sounding a note of caution, all branch members and executives were made to be aware that NDC ensures that the branch governing body is elected on democratic principles, promote the unity of party within the branch, devise and implement affirmative action to guarantee the participation of women and the youth. And that, the branch members and executives should adhere to the code of conduct for NDC.