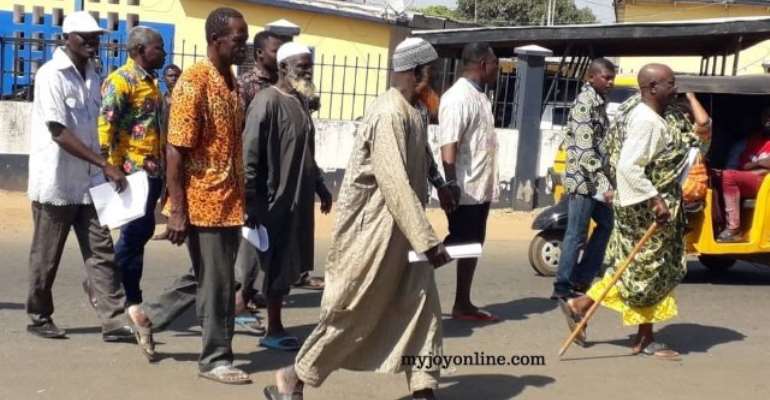 The Wa Circuit Court has remanded into police custody 10 members of separatist group calling itself 'Western Togoland' who have been accused of treason felony. They are to reappear on December 9.

The accused persons, led by 93-year-old Togbui Kuogo II, were arrested in Tumu on Sunday for allegedly canvassing for support to create a new country out of Ghana.

Justice Baah Forson Adjapong said, he has no jurisdiction to sit on the case and he was only remanding them for them to be taken to the appropriate court.

Prosecuting, Detective Sergeant Martin K. Debortse, told the court that the accused persons met Wa Naa, Naa Fuseini Seidu Pelpuo IV, at the blind side of the police to seek his support to secede from Ghana.

The group was not given an audience and was driven away from the palace.

The various police District Commanders were then tasked to be on the lookout and to inform the Regional Command whenever the group is spotted.

Last Saturday the police had intelligence that the same group was at the Tumu Kuoro's palace to inform him and the elders of their intention to fight for their independence from Ghana and they wanted their support.

They were arrested onboard a Hyundai Grace vehicle with registration number GE 8212 – 11.

Detective sergeant Debortse stated that 10 mobile phones, documents, maps of their purported Western Togoland were retrieved from them when they were searched upon arrest.

He revealed that the group also visited a number of palaces including the Yaa-Naa, Bimbila and Bawku Naaba.