Referendum And Withdrawal Of Bill 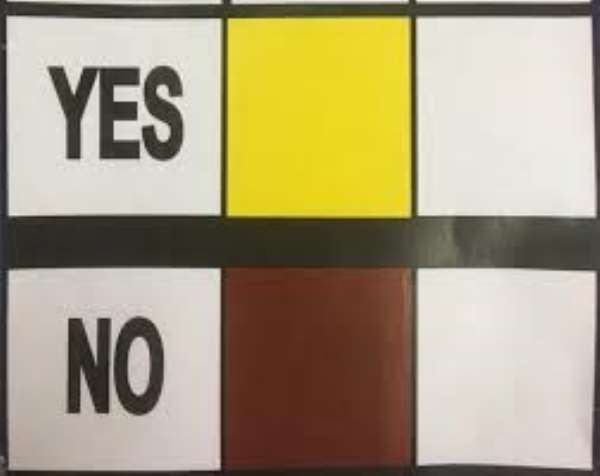 The inability of the government to capture a national consensus led to the cancellation of the much-discussed referendum and the instruction by the President to withdraw the election of MMDCEs bill in Parliament. This points to a poorly done feasibility on the benefits of the agenda of the President to the Citizenry. The people could not clearly establish the importance of the project by voting for MMDCEs on partisan lines. The grounds for the failed attempt to have a national consensus on why MMDCEs should be elected on party lines are not far-fetched. There is a general acceptance that MMDCEs should be elected but not on party lines. Many citizens and Civil Servant Organisations had bought into the idea of electing the MMDCEs of a government. So, the withdrawal of the bill in parliament to allow for the election of MMDCEs is shameful and embarrassing to stakeholders of democratic governance.

The endeavor to modernize the structure of governance at the grassroots need reconsideration by the government. The idea to restructure the local government system in Ghana had an overwhelming endorsement but there were varying opinions about its nature because it did not address some key or pertinent issues pertaining to the following:

The system of polarization that is being created or developed in our country is gaining momentum to thrive and it is affecting how state agents undertake their paid-job duties. There are extremities that are being developed in the institutions in Ghana. Meanwhile, the development of every country is dependent on quality and strong institutions. The polarity began in many institutions in our country must be curbed by some other means. One of such means is the election of MMDCEs without using party colours, platforms and sponsorship. If the MMDCEs of a President are allowed to be elected without taking a partisan form, it will form the basis for people working for their country and not political parties. Those in charge of pursuing the agenda of convincing the populace failed to tackle the issue of polarization. It affected the campaign for a ‘YES’.

The entire campaign to persuasively collate a national consensus on electing the MMDCEs of the President of Ghana in the future was unsuccessful presently because the issue of monetization and campaign financing were entirely ignored. The two issues, monetization and campaign financing, have the chance of breeding corruption and to destroy the foundations laid in building a clean system. The election of MMDCEs would have come with party primaries and campaigns that would have been sponsored by political parties. This cannot be seen as a proper system that will help in fighting corruption in Ghana. The ‘NO Sayers’ were right in their firm decision to reject political parties participating in grassroots election due to deepening of monetization.

The appointing of persons to lead state institutions is done on partisan lines in Ghana. This creates the winner takes all syndrome. The election of MMDCEs would have solved this problem if these elections are held together with the national elections. The current system and level of the democracy in Ghana may not be fitting for appointing persons from other parties. A possible sabotage is in the offing. Future attempts on this subject matter must evaluate how the pattern of winner takes all will be addressed. Those who opted for a ‘Yes’ with the notion that it had the potency to change the winner takes all syndrome did not consider the other negatives effects of their choice, monetization and polarization.

The MMDCEs are to represent the government and its policies. The government’s enthusiastic attempt to make the election of MMDCEs partisan was to achieve this aim. Elected MMDCEs do not represent the President at the Assemblies. They represent the people who elected them. In the campaign message of the candidates, the nature and processes for electing future MMDCEs were not plainly discussed. The government realizing that the MMDCEs will not represent it tried to adjust the issue to be determined at the referendum to be in tune with the dictates of the constitution.

The overarching goal of the President to allow for the election of MMDCEs in the future has many useful fruits for developing the democracy of Ghana. The attempt to modernize the principles and system of grassroots governance is apt. The cancellation of the referendum to be held in December is in good faith as those (people) campaigning for a ‘NO’ are numerous. But it should have been allowed to be tested by the opinions of the people. The instruction given by the President for the withdrawal of the bill is shameful. Parliament should have been given an opportune time to assess its ability to address the concerns of the people who wish for the election of MMDCEs without party lines. Future MMDCEs in Ghana could have been elected without a referendum. By simply amending Article 243 entirely, the election of MMDCEs is possible and can effortlessly be done.

The cancellation of the referendum and the withdrawal of the bill in Parliament should not end here as has been done to the Towing Levy in the past. There is the need for deeper and intensive evaluation to unravel the dynamics that led to the masses demanding political parties not participating in grassroots elections.

The search for the solutions must evaluate whether or not a future attempt to seek the Public’s opinion on an issue such as the botched one can address the following ignored issues; monetization, polarity of state institutions, grounds for corruption, representation of the government or the people and the importance of it in local governance and development. A search for a more popular system to modernize the democracy that is practised at the grassroots is necessary.