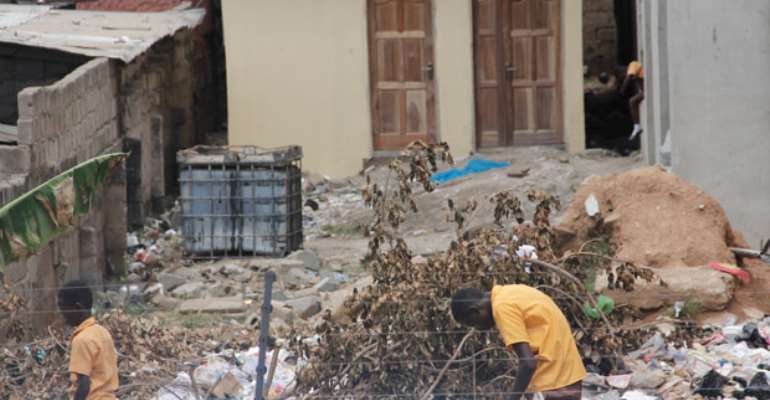 The eyesore at the Cluster Of Schools

The Nima Cluster of Schools has no functioning toilet, as a result, open defecation is the only option for the pupils whose population runs into hundreds.

Periodically the used tissue paper and fecal matter are pushed into a hole, dug adjoining a wall separating the school from the offices of the DAILY GUIDE and set on fire.

The emanating smoke is a source of much inconvenience as is the health hazard posed by its inhalation.

Even the kids are not spared the fumes from the burning fecal matter and paper. DAILY GUIDE is unable to determine why such a big school would operate for many months without functioning toilet facilities.

DAILY GUIDE was compelled to write to the Ayawaso East Municipal Assembly about the subject with a view of having them intervene, by restoring facilities in the schools to obviate a disease outbreak.

Besides the absence of toilet facilities for the primary and junior high schools making up the cluster, there is no garbage container in the school, hence the burning of the litter generated by the kids.

It is hoped that the assembly would ensure that the situation at the school which is not the best, is reversed within the shortest possible time.

Open defecation is a subject whose elimination has reached disturbing dimension in the country. That the nation's capital is not spared; the anomaly is something which should attract the attention of the relevant authorities.

FixingTheCountry Movement to march in support of Akufo-Addo'...
22 minutes ago