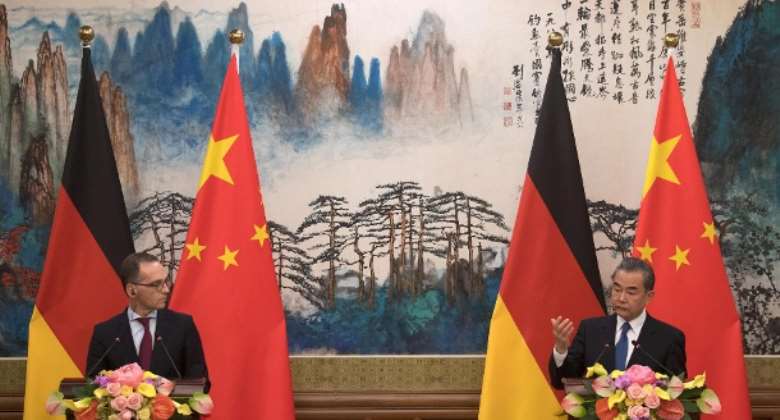 The Chinese Foreign Minister has now for the second time trashed his appointment with his German colleague Heiko Maas in a waste-basket. Since the meeting of Heiko Maas and the Hong Kong protest leader Joshua Wong, Chinese-German relations have cooled noticeably. The Chinese Foreign Minister has now once again missed an appointment with his German counterpart, Heiko Maas.

China's Foreign Minister is avoiding Berlin. On his trip to Europe this week, Wang Yi was actually supposed to visit the German capital Berlin, in order to conduct the regular "strategic and security dialogue" with his counterpart Heiko Maas. But China's top diplomat only stopped off in two neighbouring countries, first in France and then in Switzerland.

It wasn't the first time that the Chinese Foreign Minister Maas had turned his back to the Germans. Already in the last week of September he burst a joint breakfast on the fringes of the United Nations General Assembly in New York.

Consequences of the meeting with Wong
The reason is obviously the meeting between the SPD politician and the young leader of the pro-democracy movement in Hong Kong, Joshua Wong, on 9 September at an event in Berlin. China saw "serious interference in internal affairs". For the first time in many years, even the German ambassador was appointed to the Beijing Foreign Ministry. There was talk of "consequences".

It is part of an all-out blow with which Beijing wants to curb the worldwide sympathies for the demonstrators in Hong Kong. The most prominent victim is the US basketball league NBA. The manager of Houston Rockets, Daryl Morey, had got himself into trouble in Beijing when he had thumped a picture with the words "Fight for Freedom, Stand with Hong Kong" - and later deleted it again.

China's basketball federation cancelled cooperation with the NBA team. TV broadcasts were cancelled. Chinese companies ended their relationship with the NBA. It is even said that Morey was required to be fired. But the head of the league, NBA commissioner Adam Silver, remains steadfast despite considerable financial losses. "We wanted everyone to understand that we support freedom of expression."

China's self-damage?
"Lifting the stone just to let it fall on its foot", critics of the Chinese approach use a well-known saying to say that Beijing is only harming itself. "The more friends China turns into enemies, the easier it will be for the US to build a broad coalition to contain China's power and ambitions," writes critical American China professor Minxin Pei in Project Syndicate.

So far, German Chancellor Angela Merkel has been regarded as China's best friend in Europe.

Germany is by far the largest Chinese trading partner in Europe and an important technology supplier. In the trade war between the USA and China, Germany's economic importance for China continues to grow. As a courtesy to China, it was discussed during the Chancellor's visit to Beijing at the beginning of September whether deliveries of German carmakers such as BMW and Mercedes from plants in the USA to China could be exempted from punitive customs duties. But there has been radio silence ever since.

Diplomatic and economic leverage
"It is indeed the case that we have now been put in the diplomatic freezer for a while," says Mikko Huotari of the Mercator Institute for Chinese Studies in Berlin. One would actually suspect that China as a great power is becoming more and more sovereign in dealing with criticism from its partners. But the opposite is the case, Huotari says.

He believes it is quite possible that German companies will also feel the annoyance of China over the actions of the German government in the Hong Kong question. "It fits into the logic of Chinese foreign policy that economic pressure is also used to try to achieve its goals," he says. "And it would be unusual for Germany to be spared this.

Companies active in China also see the problem. "Personally, I think it's good that Maas received Joshua Wong," says a manager of a large German corporation.

"But maybe it's not good for business."
Another leading business representative, on the other hand, says he sees no evidence that the dispute is really damaging the German economy. On the contrary: "We are always told how strongly China is interested in economic cooperation with Germany." Under the palm of their hand it is also signalled that everything else is just a "political spectacle".

Environment Minister Schulz in Beijing
As the first member of the German government since the outbreak of the disgruntlement, Environment Minister Svenja Schulze will travel to Beijing at the beginning of next week. The SPD politician can test how far the effects of the meeting between Maas and Wong really go.

China expert Huotari nevertheless warns the German federal government not to change course on the Hong Kong issue. One should not make oneself blackmailable, he says. "This cannot be about apologising for what happened. That would be a severe buckling and a bad sign for the future."