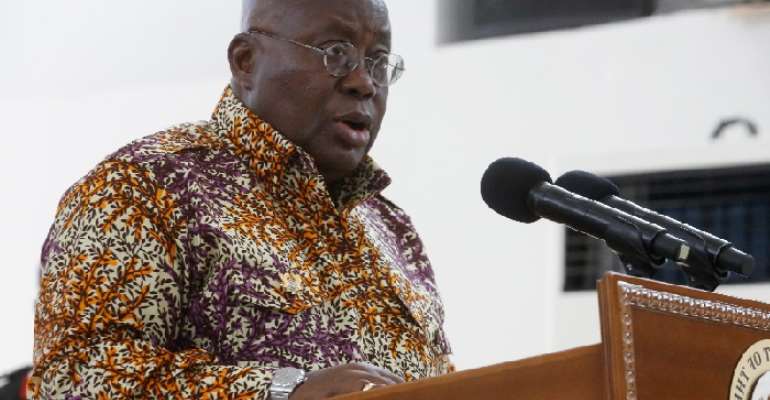 President Addo Dankwa Akufo-Addo has reiterated that he will not destroy the values and culture of Ghanaians through the introduction of the Comprehensive Sexuality Education into Ghana's Educational System.

Speaking at the St George's Catholic Cathedral in Koforidua where he joined hundreds of Christians to worship, the President stated categorically that he understands the values of the Ghanaian society and would not attempt to destroy it for anything.

He said he had taken notice of the pleas of the various religious bodies and would act accordingly giving the firm assurance that he would not deviate from the tradition, culture and values of society.

President Akufo-Addo told the congregation that he trusts in God and strongly believe that his coming to power was by God's grace and so “trust that the battle is still the Lord's and I will deliver all promises made to Ghanaians in 2016 to His glory”.

He called on the Church to pray fervently for him for God's strength and guidance to be able to deliver on his mandate as expected by the people.

Earlier, the bishop of the Koforidua Diocese of the Catholic Church, Bishop Joseph Afrifa Agyekum, urged the President to continue to trust and rely solely on the power of God to guide him in all his endeavours.

He said, the President on several occasions since he assumed power, had demonstrated his trust in God mentioning the National Thanksgiving service held shortly after his swearing-in as the President and urged him to continue on that path with all his cabinet and it shall be well with him.

The President was at the Church as part of his three-day tour of the Eastern Region and was accompanied by ministers, members of parliament and party functionaries including Mr Dan Botwe, Mp for Okere and Minister for Regional Reorganisation and Development, Dr Afriyie Akoto, Minister for Food and Agriculture, Mr Kan Dapaah, Minister for National Security and Mr Hackman Owusu Agyeman, Chairman of the NPP Council of Elders.