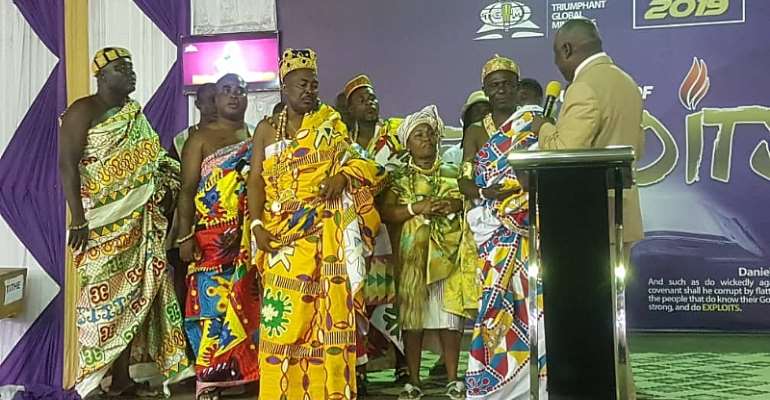 Nii Awaa II, the Ga Abola Royal Stool Dzaasetse of the Greater Accra region, the landlord of the GA land has stated that the Ga land shall proclaim its glory again.

He said, the Ga land has come afar to be left behind and the story that has been told about the Gas has not been written well.

Nii Awaa II believes with the current status as the Ga Abola Royal Stool Dzaasetse, the Gas will be able to change the narrative of the Ga state in the name of the Lord, honesty, truth, sincerity, and loyalty to every Ghana.

"We have fallen apart but we need unity in the presence of my chiefs, I say we are ready to strengthen the Ga state and make it one; things have gone wrong; we will correct them", he said.

He said these at a thanksgiving service at the Triumphant Global International Ministries at Achimota, in Accra last Sunday.

Detailing what he said has gone wrong again with the Ga communities, he stressed that, "we are all aware of the current state of the Ga State, we aware that three separate houses are battling for one seat"; adding that, in the Ga chieftaincy rule itself, they have only one seat but they hear about three separate people fighting for one seat.

Nii Awaa II, who described the situation "sad" added that the People of Abola are the rightful owners of the stool but have been denied their position.

According to him, the situation has gone beyond the various stages from the Ga traditional council to the regional house as far as to the Supreme Court and everyone is aware it's Abola term to rule the Ga state but has been denied its birthright.

He said the descendants of the Nunu family (Abolas) are ready to fight and proclaim their position. Adding that the president has responded to a petition he sent to the presidency against the Acting president of Ga traditional council Nii Duodu Nsaki, which seeks the attention of the president to intervene in the matters raised therein.

"I believe that somebody has led us on the blind rule and I'm taking that before the father who stood me on, who has led me this far; bold enough to say in our lives of which we are living that there is nothing like corruption".

He said the people of Abola are fighting for a just course in order for the Ga state it's better Cloth on again to redeem its image.

"all that we are fighting for is a singular position, if we get the head we will identify the body. If the seat belongs to whoever, it belongs to, it must be handed over to the person", he further said.

He stressed that "no one should try to compromise position because corruption does not only lay in the hands of people taking money but where one compromised position to deviate from the truth to falsely information and not allowing the rightful things should be done it is also corruption".

"I believe in my position, I can not be compromised, nobody can; as the Dzaasetse on behalf of Abola I will not allow myself into that act", he noted.

He then called on everyone and every society that made up of the Ga State to re-establish and redeem the honour of the Ga state.

He then promised to deliver and defend the heritage of his people.

"You must not deviate from God, whatever it takes you must lead them through the ways of God", he said.

High attendance on first day of parliament's 3rd meeting of ...
16 minutes ago