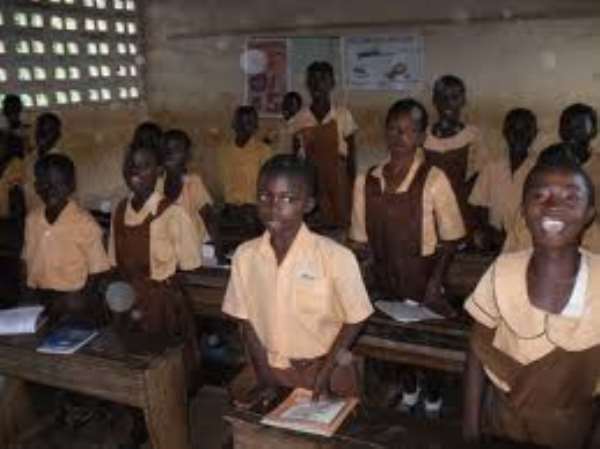 Fellow Ghanaians, if a dog's flesh is forbidden to you you don't have to smell or taste its aroma, too, whatsoever. The latest social media war and terror waged and unleashed upon the government of Ghana or more specifically the minister for education (Hon. Matthew Opoku Prempeh) and his ministry, is most unnecessary and the highest form of hypocrisy and injustice Ghanaians can ever perpetrate and perpetuate against him in this country as far as the Comprehensive Sexuality Education policy is concerned.

With all emphasis at my command and disposal, let me set the record straight that inasmuch as we believe this current NPP administration has only one more year to stay in power due to its super incompetent, profligate, clueless, visionless, reckless nature, it is fair to understand that it is not everything they have erred in government.

As an acerbic, acidic, and unsparing critic of President Akuffo Addo and his directionless government, who always find disorders in even the government's orders, I believe this one Ghanaians who are agitating, lamenting, cursing, and hissing about the CSE, have got it entirely wrong lambasting the government. Not that I am a gay or wish to condone such a morally perfidious act like it, but I trust the government is just trying to be responsible. For all we know, the children's appreciation of what we see as damaging, dangerous, and a "guilty knowledge" to them could be remarkable, and some of them could even be lecturers to many so-called adults who have refused to grow in matters of this kind.

Let me share my own harrowing ordeal when I was first brought to Tamale from a typical village in the Mion constituency growing up. I must have been eleven or twelve there about. A very good uncle of mine used to send me to buy condoms for him. Coming from a no-name village without enough basic education I never knew or heard the word condom before let alone knowing its purpose. This uncle of mine took advantage of my naivety to always send me to buy condoms for him. The pronunciation was quite alien to my tongue that I couldn't even pronounce it well. Every time I went to buy it the seller smiles and mostly those with him would have a good laugh at me mainly because of my tonation and the careless way I used to mention it to them due to my innocence. My uncle was a regular customer of these "unfortunate rubbers" that at least every three days time I had to buy him them and all my efforts to see and witness him either apply, inject, or swallow these medicine proved futile.

One day I decided to satisfy my curiosity what medicine my uncle takes every three days. That evening I opened to see this "pills". Lo and behold, to my amazement, they were neither tablets nor syrup, instead, a slippery and rubber-like substance I felt with my fingers. I wondered ponderously what this medicine could be. I brought it to him anyway and decided not to flunk so quickly until I see how these strange tablets are medicated. It didn't take long for a certain lady with a very cropped top in a black, very short skirt to arrive. I heard my uncle say "what delayed you like that?" and unaware of my presence, the lady rolled up her skirt and pantlessly sat on the already erected boxer shorts of my uncle. He frantically brushed his hand on the table for his usual "pills" before he unceremoniously sacked me out of his room. It was later on I did my own enquiry to fully understand these frequent evening "pills" of my uncle. And ever since I knew what condoms function is I never tried to use one or have I ever put this "sausage" of mine in any girl's "weewe" throughout my Junior High School, Senior High School, and now I'm done with university. The knowledge of it didn't spoil me. Of course, individual differences count.

Anyway. Now let's get to the meat of this article.

No matter how perfunctory and immoral CSE policy may seem, it is a fact that what Ghanaians claim to be afraid of and for which reason they are against this godforsaken educational policy, is neither here nor there and absolutely unnecessary. Why? Whether we collectively recognize and corroborate and endorse its existence in our social milieu or not, homosexuality, bestiality, intersexuality etc., which we are afraid of have always been part of our society. Don't look far. It takes only a responsible government that cares for its people to go the extra mile to protecting the masses whose hedonism drags them into acts that may not be forbidden by our laws but very indecent and alien to our culture and environment in general.

Perhaps the response of President Akuffo Addo about the issue of homosexuality acceptance and practice in Ghana said it all. The President in his wisdom, though a Human Rights advocate and lawyer, opined that the current society of Ghanaians abhors it, and that if later generations come and the world in their time becomes so indecent and immoral that Ghanaians see it fit to abandon the numerous fresh and beautiful women God has so blessed them with and rather resort to men for sexual pleasures, that shall be their own cup of tea but not now for God sake.

Probably, the President observed that, of two evils, he would opt for the lesser one in pursuing and ensuring and protecting Human Rights in Ghana. Because, so long us majority of the people of Ghana continue to frown upon this accursed act, if government allows it because of the misguided and immoral few, the holier than thou masses may take the law into their own hands by harassing these few bestial and homosexual ones. And as we all can tell, the typical Ghanaian can be very wicked in registering and expressing his displeasure at a particular issue their Holy Books frown upon. Mob justice is what we are very good at. In Ghana, suspected criminals or thieves are readily lynched and maimed to death. Government's efforts again to clamp down lawlessness and to protect the maltreated and molested "unclean" few who sexually prefer the anus of a man or woman to the female sexual organ, would be another headache. In short, the president decided not to burn down a house in order to get rid of a mouse.

So for the sake of the potential escalation of Human Rights violations and abuses in a colossal scale in the country which is far worse than government denying these "special" few the freedom of mating animals and the human rectum, it is good to violate the rights of the few who may cherish this morally disrespected act.

But do we really need to know what we aren't practicing? In order words, is it appropriate not to be a monkey eater but like the soup prepared with monkey's flesh? The government has to answer this questions.

For the record, I am not a bestial, and would never even pursue unnatural canal knowledge with my wedded wife let alone my fellow man.

My concern and verdict is that it is hypocritical to ruthlessly drag the government to the public square because it attempts to proffer solutions to an open secret that has been part and parcel of our Ghanaian society which even get immortalized and moralized over the years.

Don't we know people in our societies accused of this madness (homosexuality etc.) yet we eat and drink with them? Don't we have some men amongst us who use diapers yet they are neither menstruating nor having urinal challenges but because they regularly dislodge feces in their apparel unaware due to too much of "hitting" their backsides by their colleague shameless men? And is it not fair to teach the children of these men why their mothers use pads monthly and their daddies use pampers every time?

Let's drop the hypocrisy. Inasmuch as we don't want to pollute and confuse the minds of our children, it is only fair that we put things in the right perspective.

Ever since this bombshell had been dumped upon us like atomic bomb, many people including some well meaning Ghanaians have been moralizing, philosophizing, theorizing, and justifying why this abomination must not be mentioned on the fertile soil of our Republic. Argument has been made to the extent that, Ghanaians are moral loving people and religious by nature, hence this satanic educational policy must be condemned to the backwaters of civilization.

However, fellow Ghanaians, the nagging question that is begging for an answer is, are Ghanaians really religious and moral?

Is it not stranger than fiction for a Pastor to openly condemn Comprehensive Sexuality Education on grounds of morality and religiosity but sleeps with married women of other men of his church?

What morality will an Imam claim in this whole moral scam educational policy, when he accepts contracts to spiritually eliminate (kill) people because of their wealth and social incentives in society?

Minority in parliament stated their position clearly in opposition to this midsummer madness (CSE policy) on grounds of our culture. But is it also our culture, too, to bury horses and frogs alive in order to maintain parliamentary seats? How many abortions have we aided and abetted? What morality and religiosity are we talking about when we are wishing, anticipating, and waiting for a neighbor to go hungry for our happiness?

Fellow Ghanaians, are we moral when some of us roast frogs for blind beggars for food when we know we don't eat frogs in our society?

Therefore, Ghanaians don't really have the moral high ground to reject Comprehensive Sexuality Education policy in this country on grounds of morality, culture or religion.

The government is not condoning it or endorsing it, let's spare it. The reality is that immorality in the Ghanaian society today has been irredeemably pervasive which superseded that of teaching children sexuality education.

We have a lot battles to fight against, not only CSE alone.

May God Bless Our Homeland Ghana.
Long Live Us All.
The Writer, Iddrisu Abdul Hakeem, is a MasterCard Foundation Scholar (Alumnus) @ KNUST.

Akufo-Addo is sleeping on the job, he’s a failure – Ofosu Am...
48 minutes ago