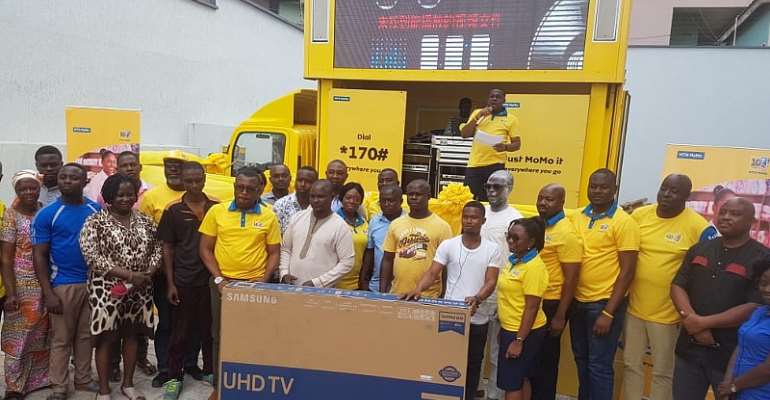 He said this to allayed fears that the service will breakdown due to the recent happenings in its sister company in South Africa, saying that "MTN MoMo services is one among the best financial service delivery with easy and comfort."

According to him, MTN MoMo is solidly on its feet since it has full support from Bank of Ghana, who regulates its activities to ensure better and convenient services to clients.

He therefore called on Ghanaian to debunk such rumours and to make use of the service to grow their businesses.

Mr. Nii Adotey Mingle made these remarks when speaking in an interview with ModernGhana at the 10year anniversary of the MoMo in ghana held in Kumasi-Kejetia.

Speaking at the ceremony Mr Nii Adotey Mingle said, MTN has supported persons with disabilities and also gave 100 people capital to start-up businesses to improve their standard of life.

He acknowledged customers and shareholders whose contributions have brought far the service thus far and called for further collaboration to enhance the service for the betterment of all.

He said reports of fraud has reduced due to the massive public education the company has been embarking on.

"The company will continue to provide public sensitization program against fraud, to ensure customers wouldn't fall prey", he added.