When Convenience Counts: Leaking, Whistleblowing and the Democrats 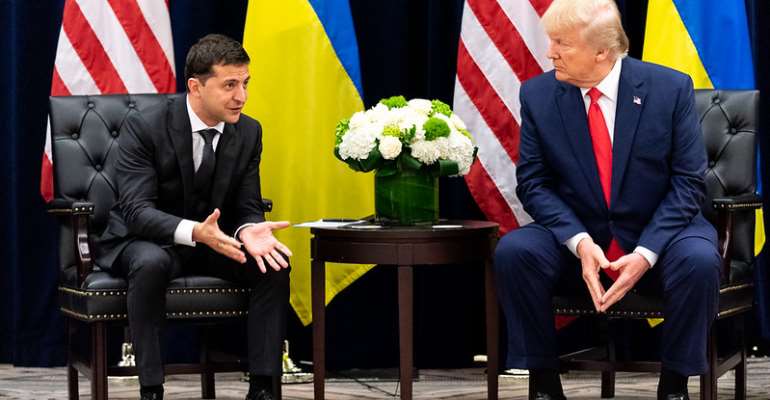 The entire Trump presidency has been a sequence of “watch this space” moments. Dismissals and political executions; attacks and distractions; gestures of deal making and promises of apocalypse. Perhaps it was high time for another bit of material to be added to this sprawling tapestry of mayhem. The elements seemed to form the basis of a badly told joke: a Ukrainian president, a US president and a whistleblower walked into a bar, and…?

Coming on the heels of another juicy sample from President Donald Trump’s former campaign manager, Corey Lewandowski, who had testified before the House Judiciary Committee on efforts by Trump to recruit him to halt the Russia probe, a rumour was filtering through: a whistleblower from the intelligence community, it seemed, had been irate about the president’s conduct.

The letter, written by the whistleblower in August this year, is positively pungent. President Trump, it argues, “is using the power of his office to solicit interference from a foreign country in the 2020 US election. The interference includes, among other things, pressuring a foreign country to investigate one of the President’s main domestic political rivals.” Rudy Giuliani, Trump’s personal lawyer, and US Attorney General William Barr also feature.

The letter does have a qualifying note. The author admits that what is being conveyed is in the realm of hearsay, the tittle tattle of agency talk. “I was not a direct witness to most of the events described.” Credibility has been assumed, however, because the pattern emerging in various accounts seem consistent: we share, because we care.

Central to the complaint is the July 25 call between Trump and Ukrainian President Volodymyr Zelensky. The subject of the conversation: Democratic presidential contender and former vice president Joseph R. Biden Jr. and his son, Hunter Biden. The allegation: that Zelensky and Ukrainian sources were essentially being urged to conduct an investigation into the conduct of the Bidens for Trump’s own electoral delectation. Then came the efforts by the White House to prevent any discussion of the call from getting out.

For all that, the letter itself forms an already rusting arsenal of claims based on information that is already in the public domain. As the Washington Post suggests, “if it continues to be relied upon as evidence of justifying impeachment, Democrats will have to make some hard choices about how to proceed.”

No matter. The whistleblower has become a well-timed sensation of deliverance for the Democratic caucus. The ecstatic thrill shown by Democrats lies in sharp contrast to the pre-Trump era, when those inclined to disclose secrets or classified information were sneered at as irresponsible and unpatriotic. The Obama administration made a habit of resorting to the 1917 Espionage Act against those daring to blow the whistle. Standing at eight prosecutions, it came to more than double those of all previous presidents combined.

In all the fuss, it was easy to ignore those remarkable words endorsed by the Continental Congress in its approved resolution of July 30, 1778: “It is the duty of all persons in the service of the United States, as well as all other inhabitants thereof, to give the earlier information to Congress or any other proper authority of any misconduct, frauds or misdemeanours committed by any officers or persons in the service of these states, which may come to their knowledge”.

When considered together, be it the tactical or careless leak, or the well intentioned disclosure of sensitive information, inconsistency prevails. At points, such activities have drawn savage retribution from the state. On other occasions, the activity has been left unpunished, suggesting the inconstancy and unevenness of approaches to information. Lamentably, they also suggest favouritism, malice and convenient exploitation.

The case of General David Petraeus, for instance, was deemed a misdemeanour, despite disclosing notebooks to his biography scribbling mistress containing “classified information regarding the identities of covert officers, war strategy, intelligence capabilities and mechanisms, diplomatic discussions, quotes and deliberative discussions from high-level National Security Council meetings and [his] discussions with the President of the United States of America.”

The March 6, 2015 letter to the US Department of Justice from Abbe David Lowell, the attorney representing Stephen Kim, one of the unfortunates charged and convicted for providing national defence information to a person without authorisation to receive it, outlined the asymmetrical nature of information disclosure in the security environment. Lowell contrasted his client’s situation with that of the General. “Despite the nature of the information and these intentional false statements [from Petraeus] the [Department of Justice] is not only permitting but is actively recommending that General Petraeus plead guilty to a misdemeanour.”

Lowell had suggested that the act of disclosure be treated as a misdemeanour regarding the mishandling or retention of classified material. Besides, his client, in discussing US ignorance of North Korea’s military capabilities with Fox News, had not intended to harm his country. This was dismissed out of hand: Kim had lied to FBI agents, which more or less sealed the matter. But as Lowell explained with pertinent sharpness, the decision to permit the general “to plead guilty to misdemeanour demonstrates more clearly than ever the profound double standard that applies when prosecuting so-called ‘leakers’ and those accused of disclosing classified information for their own purposes.”

The situation now is one of sublime convenience. The elections are next year. The Democratic contenders look more like sandpit debaters than clear-eyed candidates. But the whistleblower’s revelations are heralded as the stuff of gold dust; House Speaker Nancy Pelosi, usually reluctant in the matter, has announced the beginnings of the inquiry.

The anger shown by Trump at the whistleblower’s disclosure is being treated as abnormally sinister. It has been noted, for instance, that the president is willing to reward anybody keen to divulge who furnished the information to the whistleblower with a bounty of $50,000. But the US security establishment is famed for targeting the careless and the noble when it comes to revealing what is rotten in a state. The question to ask is what makes this particularly whistleblower the exception that proves the rule? The answer, in all likelihood, is the politics of convenience rather than the nobility of patriotism.