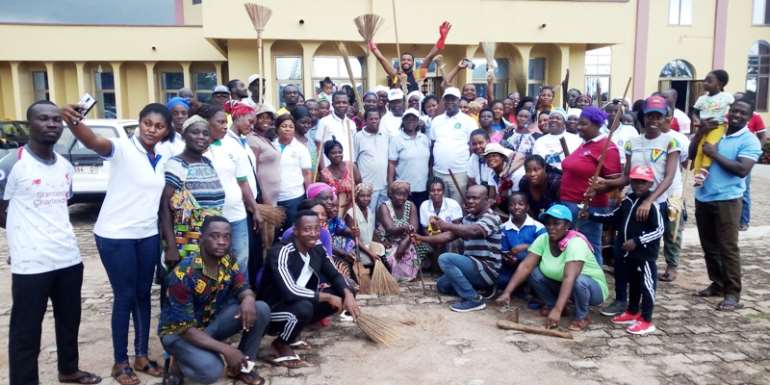 The Presbyterian Church of Ghana Ebenezer Congregation has led a massive clean-up exercise and public education against improper disposal of wastes in Sunyani.

This is aim at improving the sanitary conditions and ensure regular environmental cleanliness for healthy living.

The focused areas for the exercise were the premises and surroundings of major health facilities in Sunyani such as the Regional Hospital, Municipal Hospital, SDA Hospital, amongst others.

Choked gutters, rubbish, bushes and debris were cleared and collected for proper disposal.

Managements of the hospitals that benefited from the clean up exercise commended the Presbyterian Church for the initiative, noting that the exercise had saved their outfits and government from huge extra budget and cost to clear the filths.

They called on other organizations to emulate the initiative of the Presbyterian Church.

Addressing an enthusiastic crowd, the District Minister Rev Sam Forster Kwakye who led the Church for the exercise noted that the health facilities were targeted because they served as the home of healthcare delivery and under no excuse should a patient go home with diseases at the health delivery centre.

The 2 nd Minister Rev Ramos Twi-Antwi and the Session of Elders said they were motivated by the Clean Ghana Campaign for healthy living, hence the need to embrace and carry out the initiative.

The event was preceded by talk shows through the Church’s “Presbyterian Hour” preaching programme on some selected radio stations in Sunyani which got the general public into the exercise with loud commendation.

In an interview, the B.A Presbytery Chairperson Rev Dr Kwabena Ofosu-Addo disclosed that the General Assembly of the Presbyterian Church had made a declaration for Community Service and Development in every nook and cranny of the country and even beyond to re-instate and re-enforce the Presbyterian discipline and patriotism that the church was already known for.

He further disclosed that the church had begun a nationwide Tree Planting Exercise in all Presbyterian schools across the length and breadth of the country, to augment the efforts of government for environmental protection.

He emphasized on attitudinal change amongst Ghanaians to make Ghana a safe haven to live.

The Presbytery Chair believed that moral training and discipline in the church and schools as the fundamental nurturing grounds for the fear of God, truthfulness and sacrifice adding that before entering public service,they would commit the citizenry in all professions to rid of corruption and create a corruption-free society.

Rev Dr K. Ofosu-Addo stressed that the Presbyterian discipline still liveth to touch and impact lives through its numerous programmes and projects in every hamlet.