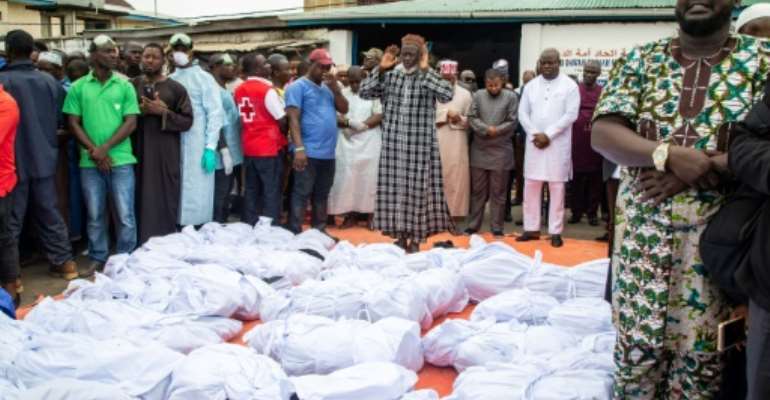 Only eight of the 36 people inside the building survived when the fire broke out in the early hours of Thursday morning as the victims, who were all of Guinean origin, slept in the school dormitory. By Carielle DOE (AFP)

The Monrovia suburb of Paynesville was a town in mourning Friday, as residents sought to come to terms with the loss of 27 pupils in a huge fire at a Liberian Koranic school.

'How do you expect me to feel in this condition?' said Isatu Sow, mother of one of the victims, who was among the first to arrive at the Bassa Town Community mosque ahead of Friday prayers.

Only eight of the 36 people inside the building survived when the fire broke out in the early hours of Thursday morning as the victims, who were all of Guinean origin, slept in the school dormitory. 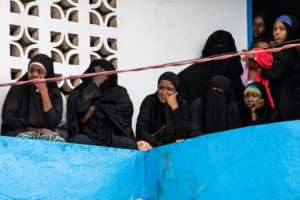 Women watch on from a balcony as bodies are taken away from the site of the fire on Thursday. By Carielle DOE (AFP)

Mosque officials said 27 boys, aged between 10 and 20, had been killed along with one of their instructors.

Six of the survivors had been allowed to return home. Two remained in hospital.

Police have not ruled out any possibility as to the cause of blaze, but some locally suggested it could have been due to an electrical fault. The fire broke out near the only door to the school dormitory.

The streets of Paynesville would normally ring to the sound of children playing, but on Friday "all children in the community, whether they are Christians or Muslim, are all interacting.' Zayzay Ballah, who lives near the school, told AFP.

Several Islamic schools in Paynesville City, gathered at the school on Friday to offer a prayer of condolence and sympathy to the lost ones.

'They were our friends and colleagues. What happened though is the will of God, but it is difficult to bear. We are here to say goodbye to our colleagues," said Ousman Keita, a student at another mosque nearby.

'He screamed my name'

Emmanuel Khan, 25, witnessed the tragedy and was still in shock.

'By the time I reached the scene, the fire had already taken over the entire building. I went close to the window where all the students had taken their final refuge.

"My friend was among them. He screamed my name, saying that they were dying. We could not get closer. The fire was too much,' Khan told AFP.

Guinea's Ambassador to Liberia Abdoulaye Dore arrived at the Bassa Town Mosque on Friday morning to offer his sympathies.

'This is too bad for the two countries, Guinea and Liberia... All of them were Guineans and Liberians. The young people who were born here, their fathers came from Guinea. This is why we are here," he told AFP.

'These children who died were our future leaders. The wish of a parent is for your kid to bury you. In this case, Allah has decided another way," local imam Mohameh Barry said during Friday prayers.

Dozens of pupils from the nearby United Children Foundation school also came to offer their condolences and help clean around the mosque which was slightly damaged by the fire that ravaged the attached Koranic school.

An official at the Bassa mosque told AFP that there had been an attempted arson attack last year.

'Last year, in the night, at the same time, someone threw a petrol bomb on the building but the students succeeded in putting it out.

We told the Community Chairman and informed the police. The police came and did some investigation but there was no result,' said assistant imam Yacouba Sow.

Guinea is a mainly Muslim nation, whereas neighbouring Liberia is majority Christian.

Liberia is on of the least developed countries in the world and its recently history has been blighted by civil wars and the deadly Ebola virus.