The Struggle For Peace In Afghanistan: Is Community Engagement The Key? 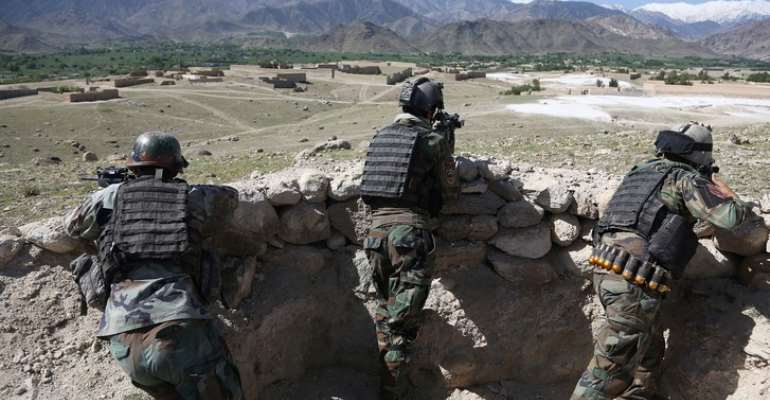 I have just read a superb book by Mark Isaacs, an Australian who has documented several years of effort by a group of incredibly committed young people in Afghanistan to build peace in that war-torn country the only way it can be built: by learning, living and sharing peace.

The book, titled The Kabul Peace House: How a Group of Young Afghans are Daring to Dream in a Land of War, records in considerable detail the struggle, both internal and external, to generate a peaceful future in Afghanistan. Some might consider this vision naive, others courageous, but few would doubt the simple reality: it is slow, daunting, incredibly difficult, often saddening, frightening, infuriating or painful, sometimes uplifting or hilarious and, just occasionally, utterly rewarding.

This is a human story written by a person who knows how to listen and to observe. And because the subject is about a group of ordinary Afghans and their mentor doing their best in the struggle to end one of the longest wars in human history, it is a story that is well worth reading.

This story is embedded in a combination of (brief) historical background on Afghanistan’s longstanding and central role in imperial geopolitics (including during ‘The Great Game’ of the 19th century) and more recent history on the progressive modernity of Afghanistan prior to the Soviet invasion in 1979 which was followed by an ongoing and multifaceted war in which the United States has played the most damaging role since its invasion of the country in 2001. But the background also includes a description of the ethnic diversity throughout the country, the role of religion and gender relations (and the challenges these social parameters present), as well as commentary on the social, economic and political regression as a result of the war’s many adverse impacts. So the book weaves a lot of strands into a compelling story of nonviolent resistance and regeneration against almost overwhelming odds.

However, that is not all. Given that all of the Afghans in this visionary community have each been traumatized by their unique experience of war, the book doesn’t shy away from describing the challenges this presents both to them personally and to the community, including its mentor and even some of the community’s many international visitors.

Most of the community members – whether Pashtun, Hazara, Uzbek, Turkmen, Tajik, Sayyid, Pashai... – have suffered serious loss during the war, especially those members who have had family and other relatives killed, or worse. Worse? you might ask. What is worse than death? Well, after reading this book, you will better understand that the context and the manner of death mean a great deal psychologically. None of the victims of this war died peacefully in their sleep after long and meaningful lives and this is just one part of the psychological trauma suffered by so many in this particular community but also in wider Afghan society.

So what does this community in Kabul do? Well, throughout its evolution and many manifestations, the community has done many things including run a variety of projects intended to foster understanding, cooperation and learning: nurture mutual respect among the diversity of people that constitute its membership, teach some of its members to read and write and facilitate learning opportunities in other contexts, teach the meaning and practice of nonviolence, give street kids the chance to learn skills that will make them employable, make duvets to give to people who go cold in Afghanistan’s freezing winters, teach and practice permaculture, organize protests against the war (including by flying kites instead of drones), and generally working to create a world that is green, equal and nonviolent.

If you think this sounds all good and straightforward, given slowly spreading acceptance of such ideas elsewhere (in some circles at least), then you might have underestimated their radical nature in a society in which ideas about nonviolence, equality and sustainability have, for the most part, not been previously encountered and have certainly not taken root. Isaacs records the observations of the group’s mentor on these subjects: ‘Over the years I have seen how the volunteers have changed within their personal lives, even if it means distancing themselves from the traditions of their own family…. But on a public level it’s much slower.’

This is understandable. As Isaacs notes, even in ordinary conversation and group discussions, ‘the weight of resistance, the taboos and the self-censorship’ made an impact on him. In a culture in which, in 2015, a woman in her twenties was stoned, her body run over by a car and then dumped in a river and set on fire because a mullah falsely accused her of burning the Quran, there is a long way to go.

One of the things that I found most compelling about the book is the occasional ‘biography’ of one of the community’s main characters. Given pseudonyms to avoid possible adverse repercussions, these stories provide real insight into the lives of certain community members and their struggle to leave home (in some cases), to join the community, to find their place within it and gain acceptance by the other members.

Some, like Hojar, are more outspoken and this, for a woman, is unusual in itself. Hojar is deeply aware of the gender inequality and violence against women in Afghanistan and will talk about it. This inspires other women, like Tara, who have not experienced this outspokenness before.

But Hojar’s life had started differently, in the mountains where, as a teenager, she was getting up at 3am to start baking bread for her four snoring brothers before milking the goats and sheep. ‘I am not a woman’, she thought, ‘I am a slave’. Fortunately and unusually, Hojar’s parents supported her desire to not marry at 13 or 15, but to continue her education and follow her dreams. It’s a long, painful, terrifying and fascinating journey but Hojar ended up in this novel community experiment in Kabul where her now college-educated talent was highly valued and put to wonderful use. She has my utmost admiration.

Unlike Hojar, other community members, like Horse, originally a shepherd in the mountains, are more circumspect on gender equality and other issues. But this doesn’t mean that Horse is not active, at times playing roles in the networking team, the accounts team and, particularly, as coordinator of the food cooperative which provided monthly gifts of food to the impoverished families of one hundred children who studied at the community’s street kids school. If you think raising donations to pay for this food was easy, particularly given the community decision to avoid the international aid sector to try to encourage Afghans to help their fellow Afghans, when more than half of the population lived below the poverty line and unemployment was at 40%, you will find it compelling to read how the teenaged Horse struggled with the monumental range of challenges he faced in that particular role. He has my admiration too.

Insaan, a doctor who mentors the community, provides a compelling story as well. Originally from another country, in 2002 a consultation with a patient at his successful medical practice inspired him to depart some time later. After spending more than two years in Pakistan, working with refugees from Afghanistan, he went to Afghanistan in 2004 to work for an international NGO in public health education in its central mountainous region.

His ongoing experience in this role, however, taught him that every problem the villagers faced had its origins in the war. And this underpinned his gradual transformation from health professional to peace activist. He discovered Thoreau, Gandhi and King, among others, and ‘became convinced of the power of love’. By 2008, Insaan had initiated his first multi-ethnic live-in community (although he did not live in it himself) in the mountains but in 2011, when his house was deliberately burned down, he departed for Kabul determined to restart the peace work he had begun in the mountains.

Starting with three young people who accompanied him from the mountains, the first manifestation of a live-in peace community in Kabul was soon underway. Endlessly paying attention, trying to provide guidance, reconcile those in conflict, and even withstanding threats of violence, Insaan’s love has undoubtedly been the glue that has held the growing and evolving community together. But not without cost. At times, Insaan has struggled, emotionally and otherwise, to survive in this perpetual war zone as the key figure holding this loving experiment together. He is a truly remarkable human being.

And it is because of the trauma that he and each of the other community members has suffered, that I hope that, in future, they can somehow dedicate time to their own personal, emotional healing. See ‘Putting Feelings First’ and ‘Nisteling: The Art of Deep Listening’. There is no better investment for any human being than to spend time consciously focusing on feeling the fear, pain, anger and sadness that we are taught and terrorized into suppressing during childhood (so that we become the obedient slaves that our society wants). Given the extraordinary violence that the people of Afghanistan have suffered and are still suffering, the value of making this investment would be even greater.

Anyway, if you want to read an account of the deeply personal human costs of war, and what one community is doing about it, read this book. It isn’t all pretty but, somehow, this remarkable community, through all of its manifestations over many years, its successes and failures, manages to inspire one with the sense that while those insane humans who spend their time planning, justifying, fighting and profiting from wars against people in other countries, those people on the receiving end of their violence are capable of visioning a better tomorrow and working to achieve it. No matter how difficult or how long it takes. Moreover, we can help too. See Nonviolent Campaign Strategy.

So allow yourself to be inspired by a group of young people, each of whom has lived their entire life in a country at war both with itself and with foreign countries, but has refused to submit to the predominant delusion that violence is the way out.

Biodata: Robert J. Burrowes has a lifetime commitment to understanding and ending human violence. He has done extensive research since 1966 in an effort to understand why human beings are violent and has been a nonviolent activist since 1981. He is the author of ‘Why Violence?’ His email address is [email protected] and his website is here.