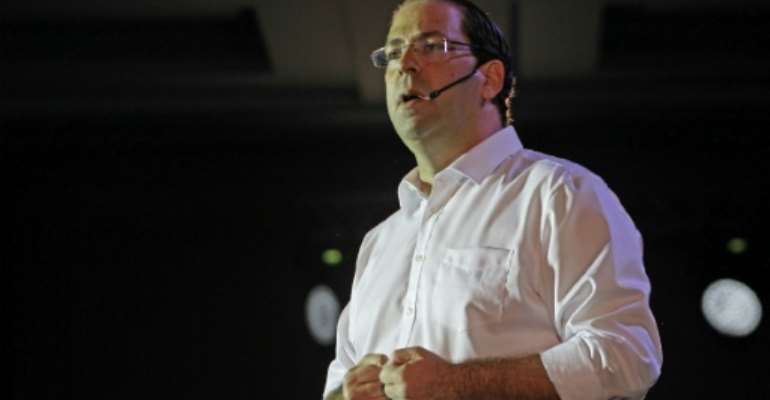 Tunisian prime minister and presidential hopeful Youssef Chahed speaks during an election campaign in the capital Tunis on September 2, 2019. By HASNA (AFP/File)

Here are brief profiles of the main hopefuls:

Now aged 43, he became Tunisia's youngest ever premier in 2016 when Essebsi picked him to head the government as a member of the late president's ruling Nidaa Tounes party.

Internal conflicts -- including a power struggle between Chahed and the late president's son -- led him to quit the party and form Tahia Tounes earlier this year.

Chahed, who studied agricultural engineering, declared a "war against corruption" in 2017 and is considered a liberal and an ally of the International Monetary Fund, which is pressing for reforms in Tunisia.

The controversial businessman and media mogul was indicted in July and arrested just weeks before the first round of the poll on charges of money laundering.

Media mogul and presidential candidate Nabil Karoui was arrested just weeks before the poll on charges of money laundering. By Hasna (AFP/File)

But the 56-year-old was still given the green light to run and has hit the campaign trail by proxy, deploying his wife and activists from his Qalb Tounes (Heart of Tunisia) party to woo voters.

In recent years he has used his popular television channel Nessma to launch high-profile charity campaigns, appearing often in designer suits as he criss-crosses the country to meet with some of its poorest.

"It has helped me to get closer to people and realise the huge social problems facing the country. I have been touched by it," he once told AFP.

Ennahdha's presidential candidate Abdelfattah Mourou speaks with supporters in the Tunisian capital ahead of the September 15 polls. By FETHI BELAID (AFP)

A lawyer who wears traditional robes, Mourou, 71, is not typical of the Islamist-inspired Ennahdha party which is contesting its first ever presidential election.

Interim speaker of parliament since July, Mourou is seen as a moderate who advocates more openness in the party and, according to political scientist Hamza Meddeb, "the least Islamist of the Islamists".

The 69-year-old physician has held several ministerial posts throughout his political career but has kept a low profile and never ran in an election.

He served under ousted leader Zine El Abidine Ben Ali and was defence minister from 2011 to 2013 after the autocratic leader was toppled by the Arab Spring uprising. In 2017 he again headed the defence ministry.

Although he is an independent candidate, Zbidi is considered to have the backing of the armed forces and of Essebsi's Nidaa Tounes.

Moncef Marzouki was installed as president by Ennahdha after the 2011 revolution and oversaw Tunisia's transition to democracy. By HASNA (AFP/File)

A veteran opponent of dictatorship, he was installed as president by Ennahdha after the 2011 revolution and oversaw Tunisia's transition to democracy.

But his controversial alliance with Ennahdha clouded the 74-year-old neurologist's reputation.

In 2014, he ran against Essebsi, in the North African country's first democratic elections, but lost.

A lawyer, he defended the rights of political prisoners detained under Ben Ali and was himself imprisoned for two years by the ousted dictator's regime.

He served as minister in the first post-revolution cabinet but only for a few months before resigning to protest against what he claimed were obstacles hampering the fight against corruption.

Abbou, who heads the Attayar party with three seats in parliament, has been campaigning against what he calls "dirty money".

An engineer, Jomaa entered the political arena following the 2011 Arab Spring uprising after years of living abroad, mostly in France where he worked for Hutchinson, a subsidiary of French energy giant Total.

The 57-year-old served as minister of industry in 2013 and a year later became prime minister heading up a cabinet of technocrats following a deep political crisis that threatened the country's nascent democracy.

In 2017, he set up his own political party, Al Badil Ettounsi (Tunisian Alternative).

A champion of the ousted Ben Ali regime, the 45-year-old lawyer defended the toppled president's Democratic Constitutional Rally (RCD) party during the trial for its dissolution after the revolution.

Moussi, one of two female candidates eyeing the presidency, is a passionate opponent of Islamists and now heads the Free Destourian party, a group formed from remnants of Ben Ali's RCD.

Supporters describe her as brave woman of principles while her critics say her political views are divisive.

Nicknamed "Robocop" because of his abrupt, staccato speech, Saied has scored well in recent opinion polls although pundits say they are unable to explain the rise of this newcomer to politics.

The 61-year-old law professor is an expert on constitutional affairs.

Saied has no partisan support and has not organised any political meetings, rather he has gone door-to-door to meet voters to explain his policies, which are rather conservative.