Fake DV Plates, DVLA Is Part Of The Problem 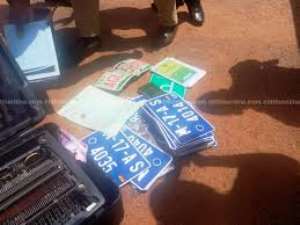 In the news these days are reports of some motorists caught with fake Defective Vehicle (DV) number plates. According to Mr. Joseph Clifford Obosu, the National Coordinator of the Compliance and Enforcement Unit of the Driver and Vehicle Licensing Authority (DVLA), several millions of Ghana cedis are lost to the state due to the increasing use of pirated number plates by the several thousands of unregistered vehicles in the system across the country.

Mr. Obosu noted that “it is unclear where the fake DV plates, almost similar to the one issued by the DVLA are procured from, but the rise in the use of fake plates is due to the fact that it is cheap and relatively easier to access.” I find it difficult to believe this. In July 2019, due to my tight schedule, I asked a friend to purchase a DV number plate on my behalf. Thinking that the plates were issued by insurance companies, he bought one from someone he thought was an insurance agent right in front of the DVLA main building in Accra. Weeks later, through an encounter with DVLA officials on the streets of Accra, I found out that the plate was fake. I was able to convince the officials to give me a day to purchase a genuine one, and I did that the following day at the DVLA main office in Accra. After securing the genuine plate, I talked with the DVLA officials in charge of DV plates. The officials acknowledge that they know that fake DV number plates are sold right in front of their office building. I asked the DVLA officials what DVLA was doing about that, and the answer was that that’s the job of the police. Yes, the police are responsible for arresting people who break the law; and that function should not be assumed by individuals, groups (patriotic or political vigilantes), etc. However, even the most efficient police agencies/departments need the help of the public to bring to their attention the majority of wrongdoing/offending in the society. Therefore, there is nothing wrong with DVLA officials bringing this issue to the attention of the police, since they are already aware of the problem.

I asked the DVLA officials I encountered whether one of them could sit in my car posing as a friend so that we drive to the hub of the fake plate dealers. Whilst over there, I will pretend to buy one and when a fake one is sold to me we could arrest the culprit. Again, I was told that it was the job of the police. I asked the official, why are DVLA officials willing to accost drivers using fake DV plates but not willing to accost those who sell fake plates? That’s the job of the police, I was reminded. Even though, and as noted above, the task of apprehending and arresting offenders is the prerogative of the police service, those officials’ insistence and constant reminder that the whole thing should be left for the police to deal with, shows the lack of goodwill on the part of the DVLA to play its part in getting rid of the problem.

In the process of chatting with the DVLA officials, one of them volunteered a shocking information. He told me that most of the boys selling fake plates are the sons of police officers so even if I report the crime to the police it will come to no avail. Where is the evidence that the fake DV plate dealers are the sons of police officers? The police in Ghana have acquired a very bad reputation, having been cited as one of the very corrupt institutions in the country but that does not mean we should point every finger at the police. Let's call a spade a spade. DVLA officials should not implicate police officers in this issue without showing us the evidence.

From the above, we all know that it is not true that DVLA officials don’t know where the fake plates are sold. We should also remember that according to the Daily Graphic of August 14, 2019, many drivers caught with fake DV plates told DVLA officials that they procured the plates from the DVLA offices in Kumasi. What action has been taken to ensure Kumasi, or specifically the Kumasi DVLA office, is not the center of fake DV plates sales in Ghana?

For whatever reasons, DVLA officials are not willing to clamp down on those who sell fake DV number plates. DVLA officials should note that most people caught with fake DV number plates may be victims rather than accomplices of the criminals. Thus, it is important that the DVLA realizes that many fake DV plate "offenders" are indeed victims themselves. Criminal justice tends to focus more attention on criminals than victims of crime.

A Daily Graphic journalist noted that the original DV number plate from the DVLA costs GH¢250 and one has to go through laborious paperwork to acquire it, and it expires in a year. In fact, the process is laborious because the DVLA has made it so. Let me trace the process: on getting to the DVLA building, you go to an office and tell the officials that you need a DV number plate, you submit a photocopy of your driver’s license, then the official gives you a note instructing you to go to the bank on the premises of DVLA to pay a fee of GHC 250. You take the payment receipt back to the official, and you are issued a DV number plate. It sounds straightforward but wait a minute. Not too long ago, as soon as you entered the premises of the DVLA, you were welcomed by a big neon sign on a wall that tells you where to begin your transactions. For example, you might see “For a DV number plate, go to room 12.” However, at least on the day I was on the premises of the DVLA, there was no such billboard information. Maybe it had broken down that day and has been fixed. Without such information, I asked the first DVLA official I saw on the premises about acquiring a DV number plate and he directed me to go to the bank to pay the fee. That did not sound right but what could I do? As I walked to the bank, I thought how much am I going to pay, what do I tell the bank teller? etc. I encountered a pleasant teller who directed me to a room for a note indicating how much and what I would be paying for. I got to the room only to be told that I should bring a photocopy of my driver’s license. I went outside the building and got the copy, took it back to the official, and he gave me a note to go to the bank to pay the fee. After that, I went back to the official and eventually he issued me the number plate.

Now, let’s consider restrictions on the use of DV number plates. According to the Daily Graphic, the DVLA is also worried that some motorists with DV number plates use the vehicles for social activities. According to the National Coordinator of the Compliance and Enforcement Unit of the DVLA, the use of DV and DP number plates is regulated by Section 50 (b) of the Road Traffic Act 2004, Act 683, which, among others, prohibit users from carrying passengers or goods for hiring or reward. The act further prohibits the use of trade plates for social activities such as funerals, weddings and carrying of children to and from school, family, relatives and friends. The regulation also prohibits the vehicle being driven by more than one person (I really don’t know what that means). As noted in the Daily Graphic, vehicles issued with the DP trade plates have up to 15 days to change to DV plate for the vehicle to be taken to the licensing office for due registration or kept in the garage until the owners are ready to register it. The DV number plate is used when a motor vehicle is being tried by or on behalf of a prospective purchaser.

The above explain partially the conditions for using trial (DV and DP) number plates. DVLA officials have noted that many motorists flaunt to restrictions. That is true but who should be blamed for that? When I purchased a DV number plate, I was given the plates and a log book. I was not given any document that explained the conditions under which the plates should be used. The question is, how will the average motorist know the restrictions placed on the use of trial plates? My suggestion is that, the DVLA should devote some pages in the log book to outlining the conditions of use of trial plates.