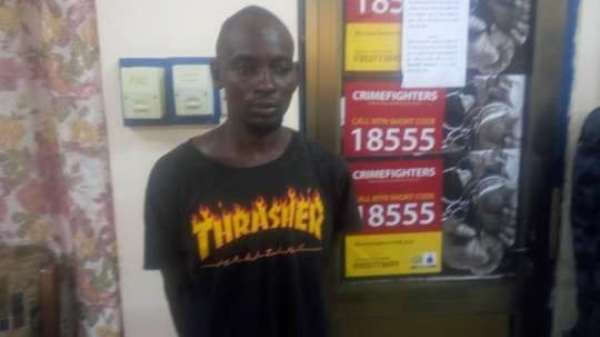 The Volta Regional Police Command has arrested a carpenter, Fofo Amedo Kwame, at Adaklu Sagbele for allegedly murdering an eight-year-old girl at Nyive, in the Ho Municipality.

The carpenter after his arrest led the police to pick a 12-year-old boy, he claimed was his accomplice.

Deputy Commissioner of Police (DCOP), Mr Oduro Kwateng, Volta Regional Police Commander, at a press briefing in Ho, said on September 03, 2019 at about 2230 hours the Ho Municipal Police Command received a report that an eight-year-old girl, Yawa Adzimah was sent on an errand by her mother at 1730 hours within Nyive township but had not returned.

The Commander said upon receipt of the report, police initiated investigations and also caused public announcement to be made in search of the girl.

Mr Oduro said on September 04, 2019 at 0010 hours, a search party found the body of Yawa Adzimah in a bush about 200 metres from their house and later informed the police.

The Commander said the police quickly moved to the scene and saw the girl lying naked with blood oozing from her genital and under her right armpit, suggesting “foul play.”

He said preliminary investigations into the incident linked the suspect to the crime, however, police could not arrest him immediately because “the suspect who had been living in a wooden structure in the Nyive township fled the town after committing the crime”.

DCOP Oduro said on September 5, 2019, the Regional Police Command through its Public Affairs Unit assured the bereaved family and the public of swift action to apprehend the culprit, adding that at about 1800 hours the same day the suspect was arrested.

The Commander said the suspect admitted committing the crime with the assistance of a 12-year-old boy and led the police to arrest him.

He said the two were currently assisting Police in investigations and urged the public to volunteer information “that will help Police to arrest miscreants because crime prevention is a shared responsibility”.

The Commander also assured the public of the Command’s commitment to delivering on its core mandate of ensuring peace and security.