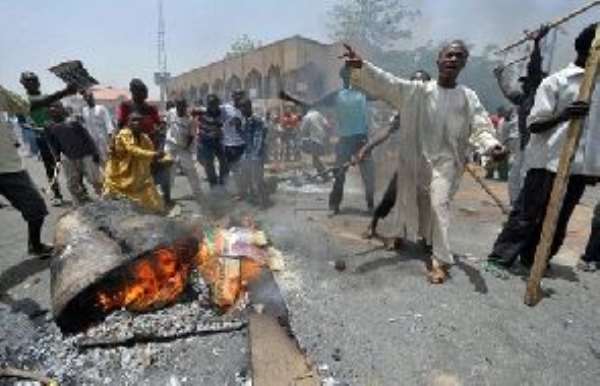 Leadership of the Concerned Youth of Nanung takes a serious exception to a press conference organized by a section within the group within the Dassana family in the Bimbilla chieftaincy impasse. At the said press conference, we observed serious but deliberate lies told by this family targeting the image of the president of the republic, H.E. Nana Addo and the Northern Regional Minister, Hon. Salifu Sa-eed. We take this opportunity to educate the public on the enormous lies and deceit told by this group.

The group has crafted a plan to misrepresent the president’s decision to set up a committee to mediate in the Bimbilla chieftaincy standoff. H.E. Nana Addo stated clearly at a durbar of chiefs in Bimbilla that he would set up a committee to find A SUBSTANTIVE CHIEF for Bimbilla. Since then, the group within the Dassana family has chosen to put their own narration to this statement made by the president. We observed a deliberate attempt by the group within the Dassana family to put the statement as if the Sri Committee is to set aside the ruling by the Supreme Court. Fellow Ghanaians, it is a palpable lie for anybody to deliberately misrepresent a statement made by the number one citizen of the land. We encourage the group within the Dassana family to come clear on the issues and put aside the propaganda it seeks to play. We see some fear being expressed this faction within the family because of the performance of the funeral of the late Dassana Andani. However, such fear is absolutely unnecessary, because the funeral of any deceased chief must be performed to pave way for the next Bimbilla chief. This is the position of the custom and tradition of Nanung.

Another key misrepresentation being peddled by the group within the Dassana family against the government is its claim that government has failed to enforce the Supreme Court ruling. What kind of enforcement is the family talking about? The court ruled that the late Dassana Andani was the legitimate Bimbilla Naa and no government appointee contest this ruling. So, we are at a lost anytime the family mentions this. It is not stated in the 1992 Constitution of Ghana that government appointees must visit chiefs, in the case of Bimbilla, the regent. We wish to inform the family that the president is not only represented by the regional minister. The MCE who has shown his bias in this case since his appointment to date visits the group within the Dassana family and attends your meetings as the master planner. So, it is shear lack of knowledge of governance to chastise the president when his representative (the MCE) does everything with you. Government cannot compel the people to pay homage to any chief.

In furtherance, we are appealing to the public not to fall prey to a group that has an agenda to confuse the system by deliberately distorting facts. A student in elementary school knows that the Sri Committee lacks the mandate to review a Supreme Court decision. The Committee has a clear mandate of finding a substantive chief for the Bimbilla skin. This is what the people of Nanung stands for and the youth are grateful to the president for thinking good about Nanung.

Fellow Ghanaians, the Northern Regional Minister superintends over the affairs of everyone in the region and has demonstrated this in diverse ways. The family needs to come clear on its claim that Hon. Salifu Sa-eed refused to visit the regent. How could he had visited the regent when you planned to insult him and even cause disturbances like you have just chosen to day? Again, we maintain our position that he and the president are represented by the MCE.

It is laughable to hear the family accusing Hon. Salifu Sa-eed of being a member of the Na Salifu family on one breath and accusing him of visiting the family on another. Why are you distancing him from his family if your claim that he is a family member is true? It’s instructive to know that the minister visits people from all walks of life anytime he is in Bimbilla.

We are unable to appreciate why the family chose to praise the murder of the late Dassana Andani when his murder provided some goodies to them in the past but turn the fire on a president who seeks to unite the people. Why was the family silent on the murder of the man since 2014? Is it the cars and the tractors they received? We cannot think far. We wish to encourage the family to give its all in the unification of the Nanung people whilst they initiate legal processes perhaps to find those who murdered the late Dassana Andani.

We wish to thank the President for his vision and to encourage the government not to give in to any threat in the media. The youth of Nanung believes in development in a peaceful environment. Our appreciation also goes to Hon. Salifu Sa-eed and to assure him that we are with him and the government in the peacebuilding process.

We also want to encourage Osman Kikaa to live an exemplary life since the young ones may be watching him. The government has initiated a number of programmes to equip the youth. We appeal to the youth who are unemployed to take advantage of these programmes and to channel their energies into productive ventures. The youth must not tie their survival to the chieftaincy challenge in Nanung. Such is not sustainable.

We wish to remind every Nanuna that we are one people in the midst of our differences. We call on the MCE, Mr. Abdulai Yaquob to conduct himself professionally and never to do anything that will derail the mediation process.