The Minister Is Right: For The Sake Of Ghanaians And Its Fisheries, Saiko Must Stop 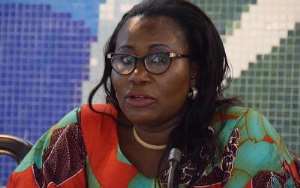 The Minister for Fisheries and Aquaculture Development has called for complete eradication of the harmful, illegal practice of saiko. She is absolutely right ­– an urgent government crackdown is needed.

‘Saiko’ is a severely destructive form of illegal fishing , where trawlers target the staple catch of canoe fishers and sell this fish back to local communities at a profit. It steals jobs, threatens food security and endangers Ghana’s economy.

This month, at the National Conference on Fisheries and Coastal Environment in Accra, Minister Elizabeth Naa Afoley Quaye made an impassioned speech to all present: the government’s priority, she said, is ensuring the recovery of fish stocks and sustainability of the sector. The illegal practice of saiko must end.

This led to a notable decline in saiko activities at Elmina, a major landing site for saiko fish in Ghana’s Central Region, showing that clear government actions can work as an effective deterrent.

Since then, however, saiko activities have crept up again. Monitoring by EJF showed that saiko landings recommenced at Elmina port just a few months after the arrest, with up to 15 saiko canoes landing fish every day. The fish – a large proportion juveniles below legal size requirements ­– were unloaded in broad daylight, and the operators clearly had very little fear of the law.

This should be a primary issue for the government. In 2017 alone this trade took around 100,000 tonnes of fish, worth over US$ 50 million when sold at the landing site. Saiko is costing Ghanaians millions of dollars annually and threatening coastal livelihoods.

Trawlers are able to hoover up vast quantities of ‘small pelagic’ fish such as sardinella – the main catch of the local canoe fishers and a crucial part of the nation’s diet. Unless urgent action is taken, scientists estimate that these stocks could collapse by 2020.

The evidence is there
The government must investigate all suspected cases of saiko fishing and ensure cases are prosecuted transparently through the court process. According to Ghana’s fisheries laws, saiko is punishable by a fine of between US$100,000 and US$2 million, with the minimum fine increasing to US$1 million where catches involve juvenile fish or the use of prohibited fishing gears. To serve as a deterrent for potential offenders, it is imperative that at least the minimum fine set out in the law be imposed.

There is no shortage of evidence for the prosecution of cases. From investigations in December 2018 and February 2019, EJF has film of trawlers meeting up with saiko canoes to transfer the illegally targeted fish. We have submitted this evidence to the Fisheries Commission, and our findings are likely to be only the tip of the iceberg.

Another factor the government should take careful note of is that one of the trawlers we caught on film was authorised to export seafood to the European Union. That could raise serious questions around Ghana’s compliance with the EU’s regulation to combat illegal fishing, which prohibits the import of illegally caught fish into the EU market. Breaches could lead to import bans to the EU – casting a dark shadow over Ghana’s economy.

All parties agree
I would like to be absolutely clear: Acting to eradicate saiko is not a risk for the government. It will enhance food security and safeguard jobs; it will stimulate the economy and boost the wellbeing of the nation. The fishing industry, from law-abiding trawler operators to small-scale canoe fishers, is in favour. Only criminals are in opposition.

This consensus was evident at the conference last week, when the President of the Ghana Industrial Trawlers Association (GITA), Sammy Nii Okai Quaye, also condemned saiko for the damage it has caused to Ghana’s small pelagic fishery. He assured participants that he will lead his association to ensure that saiko is eradicated.

It was not an empty promise. After an emergency meeting with the Ghana National Canoe Fishermen Council (GNCFC) to iron out their differences, GITA and GNCFC agreed to work together as part of the National Fisheries Association of Ghana, providing a united front for all Ghana’s fishers. Now the government needs to deliver.

Minister Quaye’s statement is a very positive sign, and I wholeheartedly applaud it. But it is not enough. What is needed is the immediate, effective and transparent enforcement of the law. Strong penalties must be applied to create a deterrent and prove that this government means to end saiko fishing for good.

Saiko is precipitating the collapse of Ghana’s staple fish stock and with it, poverty and hunger for its people. This is an ecological and humanitarian crisis. But the government can stop it. And it must do so now.

By Steve Trent, Executive Director and Co-Founder of the Environmental Justice Foundation (EJF)